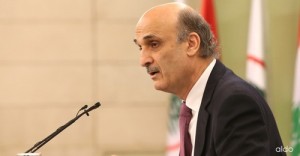 Lebanese Forces leader Samir Geagea launched a vehement attack against the Shiite group Hezbollah and its March 8 allies accusing them of promoting terrorism in Lebanon as a result of their Syrian role.

“By going to Syria to fight the Takfiris, as it says, Hezbollah brought them closer to home,” Geagea said in a speech on Tuesday during a commemoration ceremony held in honor of the late Nasir al-Assaad, a journalist, and Pierre Sadeq, a cartoonist.

Both Assaad and Sadeq are prominent Lebanese media figures.

“It has therefore destroyed another foundation of the Lebanese state, as if it was entrusted with the mission of destroying Lebanon to bring comfort to [Syrian President Bashar] al-Assad.” He said

The LF leader added that the Lebanese people were enduring the consequences of the decisions made by the Shiite group, which it took “without their approval.”

“Hezbollah’s participation in the Syrian fighting is under the orders of Iran and not those of the Lebanese people.” Geagea stressed

“Hezbollah’s participation in the Syrian fighting is under the orders of Iran and not those of the Lebanese people.” Lebanese Forces leader Samir Geagea said in a speech on Tuesday

“Those who should be held responsible for the emergence of Takfiris in Lebanon are Hezbollah and the March 8 axis in particular.”
He added: March 8’s attitude and its decisions of war and peace, use of a weapons domestically and fighting in Syria is what fueled the wave of Takfirism.”

Turning to the issue of the formation of a new government, the LF leader said that a neutral “effective” cabinet should be brought to power.

Geagea asked, “how come Hezbollah did not seek popular or political support for its military intervention in Syria but demands partnership in a future government,” adding that “the Lebanese today are in dire need of an active government that would safeguard their borders, maintain their security, revive their economy and not sacrifice them in favor of defending the Assad regime.”

“[The new government] cannot be based on the explosive contradictory mix of March 8 and March 14.” Geagea stressed

The LF leader also praised President Michel Suleiman after he opposed the reactivation of the work of the resigned caretaker cabinet and called for the formation of a new one to oversee the upcoming presidential elections.

“Those who should be held responsible for the emergence of Takfiris in Lebanon are Hezbollah and the March 8 axis in particular.” Geagea said

“We are witnessing a blind campaign against him because he is trying to save the country from the governmental vacuum that has been in place for eight months.” Geagea said

“Is it a crime if the president is trying to form a government with the accessible means, after all other means have been exhausted in the past eight months?” He asked.