Explosion near a Hezbollah center in Beqaa, Lebanon, updates 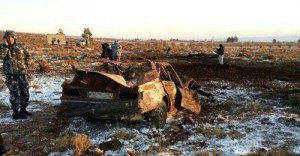 Al Jadeed ( New) TV reported that a huge explosion was heard in the town of Labweh in the Beqaa valley , near a Hezbollah center .

Fire trucks rushed to scene according to the station

According to AFP several people were killed and injured in a car bomb explosion that targeted a Hezbollah center .

The explosion took place at at dawn on Tuesday.
“A blast went off at around 4:00 am (0200 GMT)… near a Hezbollah position in Sbouba… causing deaths and injuries,” security sources said t

Residents of the area meanwhile said they heard the sound of sirens as ambulances headed towards the scene of the blast.

The sources said members of the powerful Shiite movement Hezbollah and security forces quickly deployed in the area.

In recent months, several blasts have targeted Hezbollah strongholds and convoys in Beirut and the Bekaa valley in eastern Lebanon.

Analysts say the blasts are linked to the involvement of the Iranian -backed Hezbollah in Syria’s war.

Thousands of Hezbollah fighters have been helping the the Syrian regime of President Bashar al-Assad in its crackdown against the mostly Sunni rebels seeking to overthrow the regime. The rebels accused Hezbollah of invading Syria and vowed to move the war to Lebanon.

Hundreds of Hezbollah fighers have reportedly been killed in Syria and buried in Lebanon. Ove 126,000 have been killed so far in the Syrian civil war according to activists.

Update: According to National News Agency the explosion may have taken place after Hezbollah fighters fired at the booby trapped SUV ( Toyota Prado)near one of its checkpoints.

Update 4: The death toll remains unknown since Hezbollah cleared the bodies before the Lebanese army arrived

Update 5: Hezbollah’s Al-Manar TV confirmed the explosion took place near one of the group’s bases, but said there were no casualties. It did not provide further information.

Update 6: NNA said the car bomb was “intercepted” at a Hezbollah checkpoint and exploded after members of the checkpoint fired on it. It was unclear if the car detonated from the gunshots or if the driver set off the explosion.

NNA also said that the explosion caused multiple casualties, adding that ambulances rushed to the area, which was initially sealed off by the militant group and later, the army.