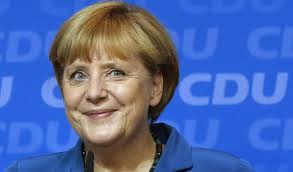 Germany’s parliament voted Tuesday for Angela Merkel to serve a third term as the country’s chancellor, this time at the head of a grand coalition government.

The coalition is made up of Merkel’s conservative bloc, her Christian Democratic Union party and the allied Christian Social Union, and the center-left Social Democrats.

Merkel was re-elected by 462 votes in Germany’s lower house, or Bundestag, with 150 votes against and nine abstentions, and was sworn in as chancellor soon afterward. Her Cabinet is also due to be sworn in Tuesday.

The parliamentary vote came after members of the Social Democratic Party (SPD) overwhelmingly approved the coalition deal in a postal ballot.

European Commission President Jose Manuel Barroso wrote to Merkel to congratulate her on her re-election, saying it “constitutes both an endorsement of your past efforts and a signal of confidence for the coming years.”

He added that he was looking forward to “constructive and fruitful cooperation” with the German government in the future, as the European Union continues its efforts to counter the effects of the global financial crisis.

Merkel’s election to another four-year term brings to an end nearly three months of uncertainty for Germany, the eurozone’s economic powerhouse.

Merkel emerged from September elections with the CDU’s biggest vote in 20 years. But the CDU and CSU did not win an outright victory, requiring them to form a coalition government.

The pro-business Free Democrats, Merkel’s previous coalition partner, failed to pass the 5% threshold for getting into parliament, putting a grand coalition with the SPD, the CDU’s chief election rival, in the frame.

The coalition agreement, hammered out last month, includes a new nationwide minimum wage of 8.50 euros ($11.50) an hour beginning January 2015 and other measures favored by the SPD.

Merkel’s third term will give the country consistent leadership at a time when the future of the euro has come under question amid the economic problems of some eurozone members.

While Germany has emerged from the crisis with its economy relatively intact, nations such as Greece have entered deep recessions while unemployment has soared.