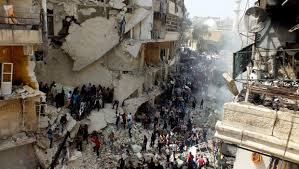 A day after airstrikes killed at least 76 people, Syrian government aircraft pounded opposition areas in the northern city of Aleppo and near the southern border with Jordan on Monday, while the United Nations appealed for $6.5 billion to help the millions of Syrians uprooted by their homeland’s civil war.

President Bashar Assad’s air force is his greatest advantage in the country’s civil war, and he has successfully exploited it to stem and even roll back rebel advances across the country. Human rights groups say Syrian military aircraft have carried out indiscriminate air raids that frequently hit civilian targets, such as hospitals, bakeries and residential areas.

The government has relied on its air power in particular in northern Syria, much of which fell to opposition fighters over the course of the past year. One of the major battlegrounds on that front is Aleppo, where Assad’s forces and rebels have been bogged down in a bloody fight since rebels launched an assault on the city in mid-2012.

On Monday, a day after government helicopters dropped barrels packed with explosives on several Aleppo neighborhoods, the Britain-based Syrian observatory for Human Rights on Monday said the death toll from those strikes had risen to at least 76, including 28 children.

The government frequently uses barrel bombs, which contain hundreds of kilograms (pounds) of explosives and cause massive damage on impact. Amateur videos posted online showed the aftermath of Sunday’s airstrikes: buildings leveled by the explosions, rubble-strewn streets and smoldering wreckage of vehicles.

Another activist group, the Local Coordination Committees, said at least 12 neighborhoods were hit and put the death toll at 83. It said that number is likely to rise because of the large number of wounded and the lack of sufficient medical supplies.

The main Western-backed opposition group, the Syrian National Coalition, condemned the strikes, and accused the government of “waging a barbaric campaign on the city of Aleppo through which it seeks revenge and the spread of chaos.”

In a statement, the Coalition also said it has documented the names of 103 people who were killed and more than 350 who were wounded in Aleppo, in addition to 21 who died in the town of Dumeir in Damascus suburbs in air raids.

“The Assad regime continues to kill civilians across Syria, blocking aid convoys from reaching stricken areas, and refuses to release prisoners — practically consecrating through all of that, its rejection of a political solution,” it said.

The Syrian government and its opponents are scheduled to meet in Switzerland on Jan. 22 to hold their first face-to-face peace negotiations. Expectations for a breakthrough are low at the U.N.-brokered talks, which aim to find a political resolution to the conflict that has killed more than 120,000 people since it began in March 2011.

The Observatory, which monitors the conflict through a network of activists inside Syria, reported more air raids Monday in Aleppo. It also said government warplanes struck in the southern province of Daraa, hitting the villages of Inkhil and Jassem. It said two women and two children were killed in Jassem.

In Geneva, the U.N. appealed to donors Monday for $6.5 billion in funds to help support the nearly 9 million Syrians uprooted by the conflict.

The appeal is based on projections of continuing humanitarian needs because of the massive displacement of Syrians both inside and outside the country into 2014. Some $2.3 billion will assist people inside Syria and the remaining $4.2 billion is expected to help refugees and host communities in countries like Lebanon, Jordan, Turkey and Iraq, the U.N. said.

“We’re facing a terrifying situation here where, by the end of 2014, substantially more of the population of Syria could be displaced or in need of humanitarian help than not,” said High Commissioner for Refugees Antonio Guterres.

With no end in sight to the fighting, the humanitarian situation is worsening among 8.8 Syrians who have been uprooted from their homes. Of those, 6.5 million are internally displaced and the other 2.3 million have sought refuge abroad.

“Massive international solidarity is crucial, not only to support suffering Syrians, but also for the countries that have so generously taken in refugees,” Guterres said.

He said the Syria crisis is having a “dramatic impact” on the host countries’ economies, societies and security, adding that the refugee disaster spurred by the conflict is the largest since the Rwanda genocide and “probably the most dangerous for global peace and security since the second world war.”

The U.N. food agency, meanwhile, said it is expanding its emergency operation to provide food to more than 7 million Syrians driven from their homes by the violence. Recent assessments by the World Food Program show that almost half the population inside Syria is experiencing food shortages and more than 6 million people urgently need food to survive.

In 2014, the WFP plans to feed 4.25 million internally displaced Syrians and nearly 3 million Syrian refugees in neighboring countries, the agency said in a statement Monday.

The food agency also plans to increase the size of its food basket to provide more calories per person per day as other sources of food are increasingly scarce for the most vulnerable. To prevent malnutrition among children, WFP said it is concentrating its resources on providing nutritional food supplements to 240,000 children aged from six to 34 months.