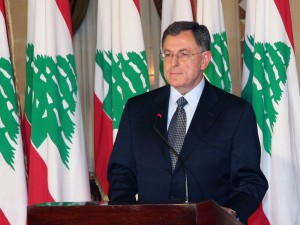 During a Sunday conference in the the northern city of Tripoli titled “Coexistence in the North is a Joint National Responsibility” , the March 14 alliance accused the Syrian regime of seeking to lead Lebanon’s Sunnis towards extremism and announced the Tripoli Declaration, which calls for national reconciliation in the city.

The Tripoli Declaration said: “The reconciliation should be held after calm has been restored in Tripoli.”

“The North has suffered at the hands of the Syrian regime through its local pawns that are backed by Iran,” the conferees added.

They demanded that those linked to the bombings and violence in the city must be brought to justice.

They also called on the security forces and army to deal firmly and fairly with any attempt to create unrest.

“Trust must be restored between the people and the state through bringing to justice all those who have wronged the city,” they declared, while highlighting the need to combat poverty in Tripoli.

The conferees agreed to the formation of a committee to follow up on the decisions of the conference and make sure that they are being implemented. 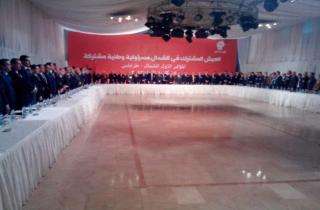 Former Lebanese PM and current Future Movement parliamentary bloc MP Fouad Siniora accused the Syrian regime of seeking to lead Lebanon’s Sunnis towards extremism, but stressed that it will fail in its plot.

He declared at the opening of the conference: “The Sunnis will not fall victim to the regime’s plot to create strife and division in Lebanon.”

“Lebanon’s Sunni’s have always been moderate and they have always respected the state,” he stressed.

He accused the Syrian regime of leading them towards extremism in order to target the state’s institutions, especially the army.

“The regime wants the Lebanese people to yield to it, but they will not surrender because Lebanon is stronger than the plots being devised against it,” added the former PM.

“The conspiracy against Lebanon will fail because the people’s will to live will persevere,” he continued.

“We are committed to a Lebanon of coexistence, freedom, and democracy,” Siniora said.

Lebanon will not succumb to Persian, American, or European plans, he remarked.

Moreover, the former PM noted that Lebanon was victorious against the Syrian regime in the past and it will not surrender to it or extremism.

Siniora also called for establishing stronger ties between Iran and its Arab neighbors following the recent nuclear deal between Tehran and world powers.

“I will say it frankly in my name and that of [former Prime Minister] Saad Hariri and the entire March 14 that the residents of Bab al-Tabbaneh and Jabal Mohsen are one family,” he said

He demanded the formation of a government that does not consist of political party figures, the withdrawal of Hizbullah fighters from Syria, and the deployment of the army along the border with Syria.

Syria’s key ally in Lebanon , the Iranian backed Hezbollah militant group has reportedly been arming and training the mostly Alawite residents of Jabal Mohsen in the Lebanese port city of Tripoli, who have been engaged in the fiercest communal fighting with the mostly Sunni Baba al Tabbaneh neighborhood.