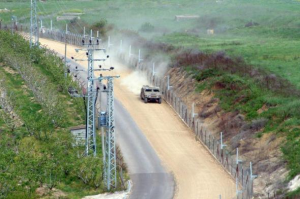 A “serious shooting incident” took place along the Israel-Lebanon border, Andrea Treneti, a spokesman for the United Nations Interim Force in Lebanon, or UNIFIL, said Sunday.

It was not immediately clear whether anyone had been injured or killed.

It was also not clear who was shooting at whom, Treneti said. Commanders from both sides were talking to the head of the UNIFIL mission to establish what happened.

“We are urging restraint,” the spokesman said.

In a statement, the Israel Defense Forces said that shots were fired late Sunday at a civilian vehicle traveling along the border, near Rosh Hanikra.

The sniper is a member of the Lebanese Armed Forces, the statement read, adding that an investigation of the incident is under way.

According to the Lebanese National News Agency, army troops opened fire on Israeli soldiers near the border.

UNIFIL has been in southern Lebanon since a 1978 conflict with Israel.

After the 2006 war between Israel and Lebanon’s Hezbollah militia, the peacekeepers’ mandate was expanded to include helping Lebanon keep the country’s south “free of any armed personnel, assets and weapons” other than government troops.

Cross-border fire has been rare since the Israel-Hezbollah war.

In late August, the Israeli air force conducted a strike in Lebanon between Beirut and Sidon, a day after rockets struck northern Israel, according to the IDF. There were no casualties.

An Israeli soldier was reportedly killed Sunday evening by the gunfire from Lebanon. The soldier’s family has been informed, according to report by Israeli daily Haaretz

A round of bullets struck Israel from Lebanese territory, apparently fired by a soldier from the Lebanon Army.

The IDF was concerned at first that the incident was a Lebanese attempt to distract the Israeli force to enable armed militants to cross the border, but an investigation has reportedly concluded that there was no infiltration and that the shooter was not from Hezbollah, the report added.

The Lebanese Army also said that one of its soldiers was missing and that there was suspicion that he was being held in Israeli hands. The Lebanese army has declared high alert in the area and reported similar action on the Israeli part, the report revealed..
This is the first incident of its kind in three years. Israel has lodged a complaint with the Lebanese government and with the United Nations, but it does not seem as though this incident will lead to any sort of escalation between the two countries Haaretz said.

The army later issued a statement in which it said two soldiers were wounded in al-Awwali while another was martyred in Majdelyoun- Bqasta , but four gunmen were killed and one of them blew himself up.

The soldier that was martyred was identified as Samir Rizk.

According to An Nahar the gunmen that were killed arrived at the scene in a car that was registered in the name of one of the supporters of Salafist Cleric Ahmad Assir . Assir has been on the run since last June when the army clashed with his followers.

Update : According to Al Liwa newspaper the Majdelyoun incident was an attempt to facilitate the passage of   booby trapped cars for using them as car bombs  on Christmas  day and one of these cars was able to pass . The direction of the  car that escaped was not known but some are speculating that it headed to the Iqleem al Kharroub area of  the Shouf region, east of the capital Beirut