Is Obama an American version Gorbachev ?

by yalibnan
497
Is President Obama an American version of Mikhail Gorbachev, the leader whose well-intentioned reforms led to the demise of his country’s global power? That’s the anxiety a traveler hears from worried U.S. allies
Share: 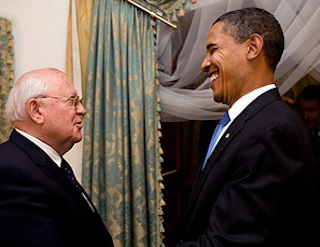 Is President Obama an American version of Mikhail Gorbachev, the leader whose well-intentioned reforms led to the demise of his country’s global power? That’s the anxiety a traveler hears these days from worried U.S. allies, and it’s mirrored in a provocative new article.

This concern about erosion of American power is powerfully stated in “The End of History Ends” by Walter Russell Mead in the American Interest. Mead warns that Obama’s attempts to disengage from the over-commitments of the George W. Bush presidency have emboldened what he calls the Central Powers: Russia, China and Iran. With the United States in seeming retreat, these rivals “think they have found a way to challenge and ultimately to change the way global politics work.”

I think Mead is too pessimistic. But there’s no denying that the worries he expresses in the article are widely shared by some of the United States’ traditional allies.

“Does the administration understand that, in this part of the world, its credibility has collapsed?” warns one well-connected Arab who speaks often with the region’s leaders. He quotes an Iraqi official, furious at what he sees as U.S. abandonment, who recently remarked caustically: “I wish I could sue the Obama administration for criminal negligence.”

Partly this scornful tone reflects the well-publicized unhappiness in Saudi Arabiaand other Sunni powers of the Persian Gulf about Obama’s diplomatic opening to Shiite Iran and what’s seen as his feckless policy in Syria. But there’s a deeper anxiety that Obama, in a Gorbachev-like attempt to correct his country’s past mistakes, has begun a process that is undermining America’s global role and making its traditional allies more vulnerable.

If you assume (as I do) that Obama is right to explore a possible deal that reverses Iran’s nuclear program without going to war, the question is how to limit the negative side effects. That requires a kind of strategic communication with friends and foes that, for five years, has been a consistent weakness for the Obama administration.

“Think of the Central Powers as an ‘axis of weevils,’ ” writes Mead. “At this stage they are looking to hollow out the imposing edifice of American . . . power rather than knock it over. . . . They have a common interest in weakening the United States in Eurasia and disrupting its alliances; increasingly, with the United States government still largely blind to the challenge, they are pushing ahead.”

One Arab analyst argues that as Obama has sought to rebalance U.S. power, he has adopted “the Ostrich doctrine” — meaning that he has ignored the reversals that have followed U.S. attempts to disentangle itself in Iraq and Afghanistan. In Iraq, where the United States spent more than a trillion dollars and thousands of lives, the government is now effectively an Iranian client, but that hasn’t drawn a U.S. reaction. In Afghanistan, where the United States also devoted enormous effort, President Hamid Karzai thumbs his nose at America and gets away with it. Foreign leaders worry that Obama doesn’t see that U.S. power is fading.

The administration would likely respond that what critics perceive as U.S. weakness is actually an attempt to define a different order — one that may be upsetting to status-quo powers such as Saudi Arabia but will ultimately provide more stability for the region. But how can the president limit the dangers in the transition?

Odd as it may sound, Obama should emulate the Iranians: Even as they negotiate a possible nuclear agreement with the United States, they are still aggressively pushing their regional agenda through proxies such as Hezbollah. Arab analysts argue that Obama should pursue a similar “dual track” approach, challenging Iran as he seeks an accommodation.

Military historians note that retreat, even to a more defensible position, is among the most difficult and dangerous of maneuvers. That line is echoed by Mead, who cautions about the risks as Obama tries to reposition the United States into an “offshore balancer” rather than a power that fights expeditionary wars. The problem, he contends, lies in the assumption that “a reasonably benign post-American balance of power is latent in the structure of international life and will emerge if we will just get out of the way.”

Returning to Gorbachev, the paradox is that, although he was right in trying to change an outmoded, overburdened system, he didn’t foresee the consequences. He thought he could pull on a few stray threads without unraveling the sweater. The analogy is unfair, in that Soviet power was malign whereas U.S. hegemony has generally been positive. But a common theme is that repositioning a superpower is a tricky business.