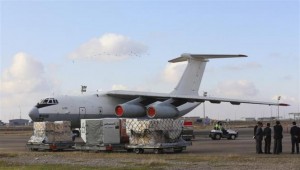 The United Nations sent its first delivery of humanitarian aid by air to Syria from Iraq on Sunday and said it plans to deliver more food and winter supplies to the mainly Kurdish northeast in the next 12 days.

The first cargo plane carrying food took off from Arbil in Iraq’s northern Kurdistan region and made a one-hour flight to Hassakeh governorate in Syria, which has had no significant aid deliveries since May.

The U.N. said two planes are contracted to do 23 rotations over the next 10 days. The aid includes 10 planeloads of food, enough to feed more than 6,000 Syrian families for the rest of December, as they endure the third winter of the conflict, which began in March 2011.

“We have been particularly worried about the situation of children and families in the northern parts of Syria because of the insecurity and limited access,” said Maria Calivis, UNICEF Regional Director for the Middle East and North Africa.

“These airlifts will help ensure they have access to safe water and health care through the tough winter months ahead.”

The airlifts were delayed from last week because of a storm which swept across Syria and Lebanon, bringing with it high winds and freezing temperatures. Cold, dry winds whipped the Tarmac at Arbil airport before takeoff.

“This wave of extreme cold led to deteriorating conditions for people in the city of Qamishli and other places in Syria,” Iyad Nuaman, World Food Programme regional coordinator, told Reuters by telephone from Arbil.

The Syrian and Iraqi governments both authorized the airlift, the U.N. statement said.

U.N. agencies have ferried limited aid supplies into Syria from Iraq and Lebanon, but not via Turkey because of objections from President Bashar al-Assad’s government.

Syria gave permission several weeks ago for the cross-border U.N. operation, which had initially envisaged truck convoys, which would have been cheaper.

However, the U.N. found negotiating with different factions on the ground in Syria had become increasingly complicated and resorted to the direct airlift instead.

The bad weather has increased the needs of internally displaced Syrians and supplies in warehouses are running low, said Eliana Naba’a, spokeswoman for the U.N’s Iraq mission.

“We are launching this airlift from Iraq because it’s much easier compared to other countries in the region,” she said, noting the short flight time.

The U.N. said last week that the number of vulnerable people in the Hassakeh province is estimated at 50,000-60,000 and that the population has been out of reach for a long time.

More than 100,000 people have been killed in the conflict in Syria, which began with peaceful protests against Assad and has descended into civil war.

The conflict has stoked sectarian tensions across the Middle East and triggered a humanitarian crisis. The U.N.’s refugee agency says about 6.5 million people have fled their homes within Syria and 2.3 million sought refuge abroad.