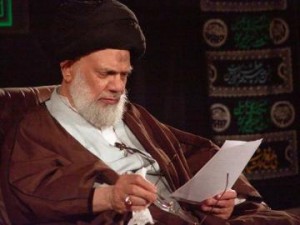 The fatwa by Iran-based Grand Ayatollah Kazim al-Haeri, one of the mentors of radical Shiite cleric Muqtada al-Sadr, comes as thousands of Shiite fighters mostly from Iraq and Lebanon play a major role in the battles.

The call likely will increase the sectarian tones of the war, which pits overwhelmingly Sunni Muslim rebels against members of Assad’s Alawite sect, an offshoot of Shiite Islam. The situation has worsened with the influx of thousands of Shiite and Sunni foreign fighters.

Al-Haeri is based in the holy city of Qom, Iran’s religious capital. Among his followers are many fighters with the feared Shiite militia, Asaib Ahl al-Haq, or Band of the Righteous, an Iranian-backed group that repeatedly attacked U.S. forces in Iraq and says it is sending fighters to Syria. That militia is headed by white-turbaned Shiite cleric Qais al-Khazali, who spent years in U.S. detention but was released after he was handed over to the Iraqi government.

Many Shiite gunmen already fight around the holy shrine of Sayida Zeinab just south of Syria’s capital, Damascus. The shrine is named after the Prophet Muhammad’s granddaughter and is popular with Iranian worshippers and tourists.

Asked by a follower whether it is legitimate to travel to Syria to fight, al-Haeri replied: “The battle in Syria is not for the defense of the shrine of Sayida Zeinab but it is a battle of infidels against Islam and Islam should be defended.”

“Fighting in Syria is legitimate and those who die are martyrs,” al-Haeri said in comments posted on his official website. An official at his office confirmed that the comments are authentic.

Asaib Ahl al-Haq currently has about 1,000 fighters in Syria and many others were volunteering to go join the battle, said Ashtar al-Kaabi, an Asaib Ahl al-Haq member who organizes sending Shiite fighters from Iraq to Syria. Asked whether the increase is related to al-Haeri’s fatwa, al-Kaabi said: “Yes. This fatwa has had wide effect.”

Over the past year, jihadi groups have begun playing a bigger role in Syria’s war and openly calling for the killing of Shiites and Alawites because of their beliefs. Assad recently said that fighters from more than 80 countries have come to Syria to fight against his forces. The rebels are mainly backed by Saudi Arabia and Turkey, Sunni powerhouses in the Middle East.

The main Western-backed Syrian opposition group, the Syrian National Coalition, claimed recently that Shiite fighters from 14 different factions are fighting alongside government forces in Syria. The coalition said those fighters are brought to Syria with the help of Iraq’s Shiite Prime Minister Nouri al-Maliki, though Iran remains Syria’s strongest ally.

Lebanon’s Iran-backed Shiite Hezbollah also openly joined Assad’s forces in May after hiding its participation for months. Since then, the group has helped government forces recapture a string of towns and villages near the Lebanese border.