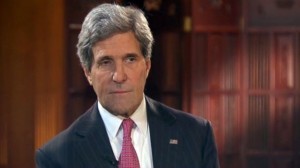 Syria has become a “huge sectarian mess” with rebel infighting and al-Qaeda’s growing strength complicating the US search for a political settlement of the conflict, US Secretary of State John Kerry acknowledged Sunday.

Kerry said Washington was relying on diplomacy to make an impact on the situation, citing plans for a peace conference next month in Geneva and efforts underway to eliminate the Syrian regime’s chemical weapons

“No one really wants to go to war in Syria because it’s a huge sectarian, you know, mess, with all kinds of implications,” he said in an interview with ABC’s “This Week.”

“So you have to work with the tools that you have that are permissible. And that’s exactly what we’re doing, trying to make the most of the diplomatic tools available in order to be able to have an impact,” he said.

Kerry acknowledged that in-fighting among the Syrian opposition and rebel groups had left a void that is being filled by extremists and that entire sections of Syria are now safe havens for al-Qaeda.

“Yes, it’s absolutely true. Al-Qaeda has greater clout there than it had before and it’s an increasing threat. And it’s a threat we’re going to have to confront,” he said.

But he added that the US Congress was reluctant to significantly fund the moderate opposition, and Americans do not want to get involved in another war.

The infighting exploded into full view earlier this month when a hardline Islamist rebel faction, the Islamic Front, seized a border crossing and a weapons warehouse from the Free Syrian Army near the Turkish border last week.

The United States responded by suspending its non-lethal aid to the rebels while it assessed the situation.

Kerry said he thought the aid to moderate rebel factions could be resumed “very quickly.”

“But I think people want to be careful, have the meetings that we need to have and make certain we can proceed forward thoughtfully. Nobody wants to just build a warehouse up again and have it taken over again,” he said.

“But look, this is complicated,” he said. “This isn’t easy.”

Below is part of  f Martha Raddatz’s exclusive interview with Secretary John Kerry transcript  that relates to Syria  for ABC’s  r “This Week,” conducted in Ho Chi Minh City, Vietnam.

RADDATZ:  The major news out of Syria this week, the U.S. has suspended non-lethal aid because Islamist rebels took over a warehouse.

RADDATZ:  How did that happen?

KERRY:  Well, it happened because there’s a certain amount of infighting taking place within the opposition.  And this is the nature of the beast that has been unleashed by Bashar Al-Assad, who probably is feeding some of it himself, because he likes to try to play the card that he is the better alternative to these extremists.

So there are some indicators that he’s even fueling some of that.

The problem is, you have some radical Islamic elements there.  You have, obviously, Al-Nusra, which is really al Qaeda.  You have, um, the, uh, Islamic Front, uh, of Iraq in the Levant, which is the Iraqi — the Iraqi state, of the — and it is very, very violent, I mean it is al Qaeda-esque.

You have, um, other groups, like Aral al-Sham and some that are very radical.  Then you have a group of, you know, less radical, more moderate.  You have the new group that’s formed called, you know, the Islamic Front…

RADDATZ:  But — but isn’t that the problem, though?

You have — the rebels are not united.

KERRY:  Well, it’s only one of the problems, Martha.  And it’s true and nobody…

RADDATZ:  So what’s the next move?

KERRY:  Well, there is a more — the moderate opposition has been united up until recently.  And we believe they still can be united.  And we’ve had conversations, uh, constantly — I’ve talked this week with foreign ministers in the region.  We’re working — there’s a meeting that’s going to take place, I think next week.  People will be coming together.
uh, it’s a — a complicated management task.

But the point is, we are aiming toward the Geneva 2 Conference, which will take place in January, in the latter part of January.  We are committed to try to bring people together, a strong representation of the opposition together with the Assad regime representatives and with maybe 30 or so other countries and all try to work in the same direction, which is to get a political settlement out of Syria.

It’s hard, but that’s the only way you’re ever going to end the fighting and establish some kind of a governance structure that builds a future for the Syrian people.

RADDATZ:  When can you start the non-lethal aid back again to those moderate rebels?

KERRY:  I think very quickly.  We — we’ve already had…

RADDATZ:  What are you waiting for?

KERRY:  — well, we’ve already had — we’ve already had some, um, proffers who have the warehouse protected and other kinds of things.  But I think people want to be careful, have the meetings that we need to have and make certain we can pre — proceed forward thoughtfully.  Nobody wants to just build a warehouse up again and have it taken over again.  That doesn’t make sense.

So we need to make sure of where we’re going.

But look, this is complicated.  This isn’t easy.  You know, a year ago, before the president started to focus on — on — on this and figured that we have to accelerate the efforts to get a political solution, nothing was happening except fighting and killing.  And — and a year ago, chemical weapons were being used and under the control of the Assad regime.

Now, through our diplomatic efforts,  we are moving toward a peace conference…

RADDATZ:  And you really think…

It’s not easy.  We also now are removing all of those  chemical weapons from Syria.  That wasn’t happening a year ago.  People were being killed by them.  Now we have them under control…

RADDATZ:  But you’ve still got this massive…

KERRY:  We have a massive humanitarian crisis, Martha.  You know, look, these things are complicated.

How do you go in and get the humanitarian assistance if the Assad regime is preventing it from happening?

No one on America wants to put American troops on the ground.  We could get the food in there very quickly if we did that.  But that choice isn’t available.

And no one really wants to go to war in Syria because it’s a huge sectarian, you know, mess, with all kinds of implications.

So you have to work with the tools that you have that are permissible.  And that’s exactly what we’re doing, trying to make the most of the diplomatic tools available in order to be able to have an impact.

RADDATZ:  In — in the meantime, John McCain says the moderate opposition groups are losing.  As a result, extremists are filling the void and entire sections of Syria stretching deep into Iraq are now effectively safe havens for al Qaeda.

KERRY:  Uh, there’s some truth to it.  Yes, it’s absolutely true.  Al Qaeda has greater clout there than it had before and it’s an increasing threat.  And it’s a threat we’re going to have to confront.

Uh, the — but John also understands that the members of Congress with whom he serves were not willing to put additional money in in order to fund overtly and put money into the opposition significantly.

So we have some money, some help going.  But Congress is not disposed to try to provide additional assistance.  The American people do not want America involved in another war, in that particular war, at any rate, for these particular reasons.

And I think, uh, given the circumstances, we’re doing pretty well at managing to get it toward a political, um, conference where, hopefully, a — an alternative can be put into play.  That’s our — that’s our best shot, Martha.

Below is part of the interview transcript of Martha Raddatz’s exclusive interview with Secretary John Kerry for “This Week ” that relates to the situation in the Middle East and specially Syria . It was conducted in Ho Chi Minh City, Vietnam.