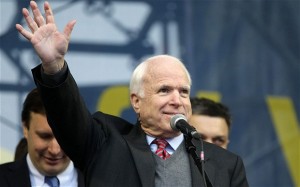 Protesters in Ukraine on the fourth week of daily anti-government protests have received support from John McCain, the American senator.

Mr McCain addressed the crowds gathered in central Kiev, telling them that he agreed with their demands that Ukraine move towards Europe – not towards Russia, as the government is attempting.

“Ukraine will make Europe better and Europe will make Ukraine better,” he said to crowds protesting against President Viktor Yanukovich’s U-turn in trade policy away from Europe towards Russia.

“We are here to support your just cause, the sovereign right of Ukraine to determine its own destiny freely and independently. And the destiny you seek lies in Europe.”

About 200,000 anti-government protesters converged on the central square of Kiev on Sunday in a demonstration that the opposition’s morale remains strong.

A much smaller rally of government supporters, about 15,000, was taking place about a mile away from Independence Square – familiarly called Maidan – where anti-government protesters have set up an extensive tent camp and erected barricades of snow, hardened with freezing water and studded with scrap wood and other junk.

Protests began November 21 after Mr Yanukovych announced he was backing away from signing a long-awaited agreement for Ukraine to deepen trade and political ties with the European Union and instead would focus on ties with Russia. The protests grew in size and intensity after two violent police dispersals of demonstrators.

In the face of the growing protests, which present a serious challenge to Mr Yanukovych’s leadership, Ukrainian officials this week renewed talks with the EU about signing the association agreement.

However, the EU’s top official on expansion issues, Stefan Fuele, cast doubt on the prospects on Sunday.

Mr Fuele said on his Twitter account that work on the agreement is “on hold” and that the words and actions of Mr Yanukovych and his government regarding the agreement are “further and further apart.”