Snow hits Cairo for first time in over 100 years 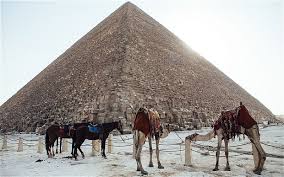 Snow coated domes and minarets Friday as a record Middle East storm compounded the suffering of Syrian refugees, sent the Israeli army scrambling to dig out stranded motorists and gave Egyptians a rare glimpse of snow in their capital.

Nearly three feet of snow closed roads in and out of Jerusalem, which is set in high hills, and thousands in and around the city were left without power. Israeli soldiers and police rescued hundreds trapped in their cars by snow and ice. In the West Bank, the branches of olive trees groaned under the weight of snow.

In Cairo, where local news reports said the last recorded snowfall was more than 100 years ago, children in outlying districts capered in white-covered streets, and adults marveled at the sight, tweeting pictures of snow-dusted parks and squares. In other parts of the city, rain and hail rocketed down.

On social media, some joked that the snowfall was the mystical work of Gen. Abdel Fattah Sisi, the military strongman who is the focus of something of a cult of personality among his followers. Sisi led the coup five months ago against the highly unpopular but democratically elected Islamist president, Mohamed Morsi.

Storm-driven waves lashed Egypt’s Mediterranean coast, and fishermen in the ancient port city of Alexandria were warned by authorities against putting out to sea. In the Sinai Peninsula, snow fell on Mt. Sinai and St. Catherine’s monastery at its foot. Sleet washed the dusty fronds of desert palm trees.

The inclement weather worsened the situation for tens of thousands of Syrian refugees in Lebanon, where many live in makeshift camps, abandoned buildings and other temporary sites lacking heat and protection from the elements.

In Lebanon’s Bekaa Valley, many refugees were digging out snow from their provisional shelters amid subfreezing conditions. The situation is likely worse for multitudes of displaced people inside rebel-held and contested areas of Syria, where clashes and blockades by both sides in the country’s civil war have severely hampered delivery of aid.

In Israel, where the storm was described as the heaviest December snowfall since 1953, thick clouds temporarily closed Ben-Gurion International Airport, causing the diversion of two international flights to Cyprus. Jerusalem’s mayor, Nir Barkat, likened the storm to a snow tsunami.