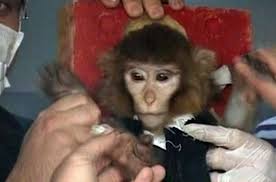 Iran said on Saturday it had sent a second live monkey into space and brought it back safely, the latest demonstration of the country’s missile capabilities, state news agency IRNA reported.

Iran said it launched its first monkey to space in January.

Rouhani used Twitter to mark the latest event, a demonstration of rocket power that is likely to cause concern in the West and among some Gulf states, which are worried about Iran’s nuclear ambitions.

He said the monkey was named Fargam and had been returned to earth “safe an sound”.

“In total, this is the second monkey sent into space and returned in perfect health to Iran,” Rouhani said in another Twitter message.

In November, the world’s six powers made a breakthrough deal for Tehran to curb its nuclear programme in return for limited sanctions easing.

The agreement appeared to face its first major difficulty on Friday with Russia warning that expanding a U.S. sanctions blacklist could seriously complicate the deal’s implementation.

The Islamic Republic denies seeking weapons capability and says it seeks only electricity from its uranium enrichment so it can export more of its considerable oil wealth.

The West worries that long-range ballistic technology used to propel Iranian satellites into orbit could be put to use dispatching nuclear warheads to a target.

Iran’s efforts to develop and test ballistic missiles and build a space launch capability have contributed to Israeli calls for pre-emptive strikes on Iranian nuclear sites and billions of dollars of U.S. ballistic missile defence spending.