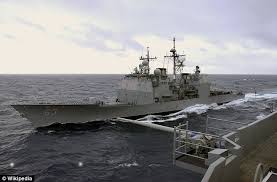 In a sign of the increased tensions between the United States and China on the open seas, navy vessels from the two countries almost collided in the South China Sea when a Chinese ship cut across the bow of an American cruiser, a senior United States defense official said on Saturday.

A serious accident was averted when the U.S.S. Cowpens, a missile-carrying cruiser traveling in international waters, was forced to maneuver to avoid the Chinese vessel, the official said.

The episode, which occurred on Dec. 5 but did not become public until Friday, was one more example of the growing rivalry between China, a rising maritime power, and the United States, the dominant naval power in the Pacific region since World War II.

It came as the Obama administration has chastised China for imposing an air defense identification zone in the East China Sea over islands and airspace that are also claimed by Japan.

The U.S.S. Cowpens was observing the new Chinese aircraft carrier, the Liaoning, as it made its first voyage in the South China Sea from its home base in Qingdao, the headquarters of China’s North Sea Fleet, the defense official and American Navy experts said. The official and Navy experts spoke on the condition of anonymity because of the sensitivity of the matter.

The Chinese vessel cut across the bow of the America ship at a distance of less than 200 yards, the defense official said. The vessel was similar to an American tank landing ship and was accompanying the aircraft carrier, apparently as a screen.

The tactic of the Chinese ship “was particularly aggressive” and “unhelpful in trying to increase cooperation between the two navies,” he said.

Analysts said the tense encounter underscored the dangers of the current situation in the area.

“This illustrates the anxieties between the United States and China, and it is very troubling,” said Lyle J. Goldstein, an associate professor at the China Maritime Studies Institute at the U.S. Naval War College on Rhode Island. “International politics on both sides call for ratcheting up of tensions, and I don’t see either side finding compromises. Neither side knows the other’s red lines.”

Surveillance activities by the United States of Chinese military operations have always been sensitive. In 2001, an American EP3 spy plane collided with a Chinese fighter jet in the waters off southern China, an accident that sent relations between Washington and Beijing into a freeze.

The information office at the Chinese ministry of national defense did not immediately respond to a request for comment.

American officials said the U.S.S. Cowpens had been adhering to international guidelines governing such naval maneuvers.

“Our cruiser was operating in international waters of the South China Sea, not close into the coast and in the general vicinity of the aircraft carrier,” the defense official said.

The Chinese ship accompanying the aircraft carrier began shouldering the American cruiser, and then crossed its bow, he said. After making the evasive maneuver, there was “bridge-to-bridge” contact, in English, between the two ships, the official said. “It was tense but professional,” he said.

In a formal statement, the Pacific Fleet based in Hawaii said, “This incident underscores the need to ensure the highest standard of professional seamanship, including communications between vessels to mitigate the risk of an unintended incident or mishap.”

It was not clear how far the U.S.S. Cowpens, a vessel more than two decades old, was sailing from the Chinese aircraft carrier. But because of the sophisticated American radar, it did not have to be particularly close in order to observe it, naval experts said.

The Chinese aircraft carrier, a refurbished Ukrainian vessel, was launched last year, and is not yet fully operational. For instance, it does not carry a full complement of aircraft. Still, the United States Navy wants to understand how the Chinese are planning to use the carrier.

When it left port, the carrier was accompanied by two missile destroyers and two missile frigates, Chinese new media reported.

Officials from the American and Chinese navies meet every year to discuss maritime rules and incidents at sea, but so far, the gatherings have been fairly desultory, Mr. Goldstein said. “The maritime consultative agreement has been a disappointment to the American side,” he said.

The American defense official drew a comparison between the behavior and operations of Iranian and American navies, and that of the Chinese. “We operate in the vicinity of the Iranian navy,” he said. “The exchanges are curt but professional.”

The fact that the episode between the U.S.S. Cowpens and the Chinese ship took place in the South China Sea is bound to raise concerns, naval experts said. China contends that more than 80 percent of the sea is under its purview, and in a signal of its intention to enforce that claim, the nation has taken virtual ownership from the Philippines of the disputed Scarborough Shoal in the South China Sea.

In March 2009, five Chinese ships harassed the U.S.S. Impeccable in international waters in the South China Sea, forcing the American ship to make an emergency maneuver in order to avoid a collision.