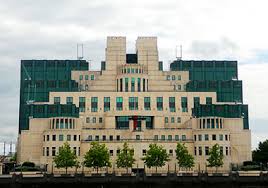 Iranian intelligence authorities have arrested a man on charges of spying for Britain’s MI6, the semi-official Fars news agency reported on Saturday.

The head of the Kerman region’s revolutionary court, Dadkhoda Salari, told the agency the suspect made contact with British agents 11 times in recent months, inside and outside the country.

According to Salari, the suspect has admitted his guilt and he is currently on trial.

A spokeswoman for the Foreign Office in London said: “We don’t comment on intelligence matters.”
The report, which Reuters could not verify, comes at a time when London and Tehran have been taking steps towards restoring diplomatic relations that were broken off after activists stormed the British embassy in Tehran in November 2011.

London announced the appointment of Ajay Sharma as non-resident charge d’affaires inIran in November, and Sharma made his first visit to Iran in that role this month.

In November, six world powers made a breakthrough deal for Tehran to curb its nuclear program in return for limited sanctions easing.

The agreement appeared to face its first major difficulty on Friday with Russia warning that expanding a U.S. sanctions blacklist could seriously complicate the deal’s implementation.