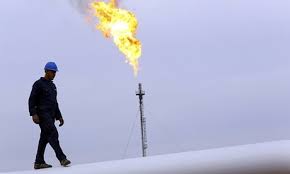 Masked gunmen killed 18 people, most of them Iranians, working on a gas pipeline outside the northeastern Iraqi town of Muqdadiya on Friday, witnesses and officials said.

One worker wounded in the assault told Reuters the attackers sped up in three cars as he and his colleagues were digging a trench to extend the line.

“Three of them got out of a car and started firing on the workers inside and outside the trench,” said Ibrahem Aziz by phone from hospital.

No group immediately claimed responsibility for the attack on the workers, 15 of them from Shi’ite Muslim power Iran. But officials said militants from the Iraqi arm of Sunni Muslim group al Qaeda had been active in the area.

Ten years after the U.S.-led invasion that toppled Saddam Hussein, Iraq’s Sunnis, Shi’ites and Kurds have yet to find a stable power-sharing deal and violence is again on the upswing.

Sunni Islamists see neighbour Iran as one of their main enemies, particularly because of Tehran’s support of Iraq’s now Shi’ite-led government.

Iran signed a deal in July to build a pipeline and import gas into Iraq to fuel power plants in Baghdad and Diyala province, where the attack took place.

Officials said the workers were employed by an Iranian oil and gas company, but did not give its name. The three other people killed were Iraqis and eight workers were wounded, medical and local officials said.

In a separate incident, at least five people were killed and 14 wounded when a car bomb exploded in southern Baghdad’s outskirts of Nahrawan, police said.

A further six people were killed in a car bomb explosion in the town of Madaen, south of Baghdad, police said.

Iraq’s sectarian balance has come under further pressure from the civil war in neighbouring Syria, where mainly Sunni rebels are fighting to topple a leader from an offshoot of Shi’ite Islam backed by Iran.

Violence in Iraq is at the highest level in at least five years. More than 8,000 people have been killed this year, according to the United Nations.