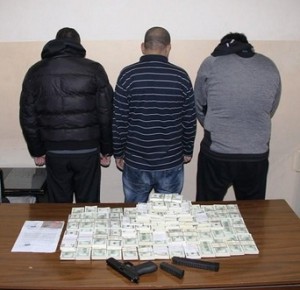 Lebanon’s State Security apprehended on Friday a three-man gang who had counterfeited significant amounts of money and carried out other crimes.

“The regional South Directorate, in cooperation with the Beirut and Mount Lebanon Directorates, was able to arrest members of a gang that are selling fake hundred-dollar bills and conducting theft, fraud and counterfeiting,” a statement released by the State Security’s General Directorate on Friday read.

One million dollars of counterfeit $100 banknotes was confiscated along with a stolen Nissan Sunny car and a weapon with its ammunition, according to the statement

The statement identified the Lebanese suspects with their initials as D.B., M.A. and M.S., but did not specify when the arrests were made