Coptic Christians being 'targeted' in Egypt 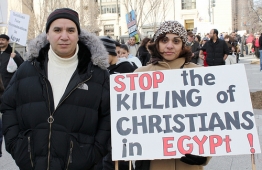 Highlighting escalation of attacks on Egypt’s Copts, speakers at a congressional hearing this week expressed concerns over the Muslim Brotherhood making Christians the scapegoat for the Islamist group’s political downfall.

“An unprecedented wave of violence erupted against Christians” after security forces’ violent crackdown on Brotherhood protesters following the removal of President Mohammed Morsi in July, noted Bishop Angaelos of the Coptic Orthodox Church in the United Kingdom.

“They [Copts] alone were set as scapegoats and erroneously blamed and accused of instigating or contributing to the violent dispersal of pro-Morsi demonstrators,” added Bishop Angaelos at a joint hearing before the Subcommittee on Africa, Global Health, Global Human Rights and International Organizations and Subcommittee on the Middle East and North Africa on Tuesday.

The bishop noted that the frequency in attacks on Christians and other religious minority groups, their communities and places of worship is increasingly disturbing. “Carried out by radical elements in society, these attacks are not merely on individuals but on the Christian and minority presence in its entirety.”

“In recent months, undercurrents of abuse and contempt for human dignity long existing in Egypt have turned into flash floods of violence,” said Rep. Chris Smith of New Jersey, who chaired the hearing.

Smith also noted that “some in the Muslim Brotherhood scapegoated the Copts although the Copts had nothing to do with the military’s violent response.”

Samuel Tadros, research fellow, Hudson Institute’s Center for Religious Freedom, who also testified at the hearing, pointed out that two separate attacks on Copts were reported in the southern Egyptian governate of Menya as recently as on Nov. 28.

In October, four Copts were killed, including two sisters ages 8 and 12, when gunmen on motorcycles opened fire at a wedding party outside a church near Cairo, stated Dr M. Zuhdi Jasser, vice chair of the U.S. Commission on International Religious Freedom, who was also part of the hearing.

In August, at least seven Copts were killed and more than 200 churches and other Christian religious structures, homes and businesses assaulted, Jasser added.

While the government has failed to bring to justice the perpetrators of sectarian attacks, the courts have continued to convict and imprison Egyptian citizens charged with blasphemy under Article 98(f) of its penal code which prohibit “contempt” or “defamation” of religions, he said, noting that since the January 2011 revolution, USCIRF has observed a significant increase in contempt-of-religion cases.

“While most of those targeted are disfavored Muslims, Christians are disproportionately affected,” Jasser added.

Christian groups require government permission to build a new church or repair an existing one, and the approval process continues to be time-consuming and inflexible, he said. “No churches were approved for new construction or repair in 2012, despite applications being submitted to governors, as currently required.”

“No matter who rules Egypt, the twin phenomenon of the growing hatred of Christians and the willingness of their neighbors to attacks them, and the failure of Egyptian governments to protect them and stop the attacks have become the hallmarks of the Copt’s continued plight,” remarked Tadros.

Smith recommended that the United States ensure protection of Christian and other minorities, noting that American taxpayers give Egypt nearly 1.5 billion dollars in foreign aid each year. “This [Obama] Administration’s short-sighted approach of not clearly linking aid to the protection of human rights in Egypt has been unequivocally ineffective,” he said.