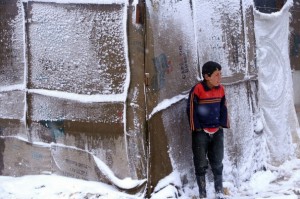 The United Nations said Wednesday that it is “extremely concerned” for Syria’s refugees as snow and freezing temperatures descended on the region.

Syria and the countries that border it have been bracing for what is expected to be the worst winter storm in years. Snow hit some areas of Lebanon, Turkey and northern Syria overnight Tuesday as sharp winds and cold, heavy rains battered others, causing misery for hundreds of thousands in camps and shanties.

In Lebanon, despite the wintry conditions, the flow of Syrians fleeing the war is unrelenting. Local officials in the border town of Arsal, where some of the heaviest snow fell overnight, on Wednesday reported the arrival of 200 men, women and children who had risked the treacherous journey across the mountains on foot. Many were from the town of Yabroud in the Qalamoun region, where a Syrian army offensive is underway.

Aid agencies, the Office of the U.N. High Commissioner for Refugees (UNHCR) and the Lebanese army rushed to distribute kits containing plastic sheeting and blankets to the newcomers, but poorly funded humanitarian groups are struggling to meet the overwhelming needs. Authorities remain reluctant to establish permanent refu­gee camps in Lebanon and have opened only one official, 100-tent “transit camp.”

In the Lebanese town of Minieh, just outside the port city of Tripoli, a muddy, makeshift collection of tents and shacks spills down from the side of the highway to the coast. Despite biting sea winds and flooding, the 400 Syrians who have sought refuge here do not qualify for the UNHCR’s winter fuel assistance, because their camp is too close to sea level.

On Wednesday, children dug rocks out of the ground with their hands to weigh down plastic sheeting that covered their tents. The tarpaulins nailed to wooden frames provide poor shelter in driving rain and wind.

A man, 47, who arrived from Syria’s Hama province a year ago pointed out the place where water had flooded his tent overnight. He said it was impossible for his family to sleep and expressed fear that the storm — which was expected to continue toward the weekend — would get worse.

There was no heating inside the damp tent, which costs the family $77 a month. The man’s wife huddled with their seven children, holding out her daughter’s hand to a visitor. “It’s ice,” she said.

In a tent a little higher up in the camp, a 51-year-old man, his wife and their 13 children gathered around a small barbecue. The cheap, cut-price charcoal, virtually dust, is difficult to light. When the rains started a few days ago, the tent flooded, said the man, who also declined to give his name. “The place was a swamp,” he said. “We propped up wood above the water and slept on that.”

Roberta Russo, a UNHCR spokeswoman, said the agency’s top priority was refugees at higher altitudes, where snow was falling, but she said assistance would be expanded where possible.

“We are extremely concerned about the onset of winter,” Russo said. “We are giving out blankets and materials. But as long as people remain in tents, there’s only so much you can do.”