Saudi cleric: suicide bombers are criminals, will go to hell 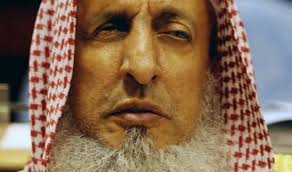 The Saudi cleric, whose views influence many Sunni Muslims respectful of the kingdom’s strict version of Islam, denounced suicide attacks after al Qaeda’s 2001 assault on U.S. cities, but his latest comments recast the message in sharp terms.

“Killing oneself is a grave crime and a grave sin,” Sheikh Abdulaziz Al al-Sheikh was quoted as saying by the pan-Arab, Saudi-owned Al Hayat newspaper on Thursday.

“Those who kill themselves with explosives are criminals who are hastening their way to hell.”

“Those who kill themselves with explosives are criminals who are hastening their way to hell.” Saudi Arabia’s Grand Mufti, Sheikh Abdulaziz Al al-Sheikh was quoted as saying

Nearly two months ago, the mufti, who is appointed and paid by the Saudi government, urged Saudis not to travel to Syria to join Sunni rebels battling to unseat President Bashar al-Assad.

Riyadh broadly backs the rebels, but with the rise of Islamist militant factions in Syria, it has grown increasingly worried that Saudis who fight for the anti-Assad cause might one day return home to wage a jihad in the kingdom.

Saudis who had fought for al Qaeda in Afghanistan and Iraq staged a violent campaign in their homeland from 2003-06 in a failed attempt to bring down the ruling al-Saud dynasty.

Although some prominent Saudi clerics spoke approvingly of suicide attacks on non-Muslims more than a decade ago, most have since argued against such actions.

“Their (suicide bombers) hearts have veered away from the right path, their minds have been invaded by evil,” Al Hayat quoted Al al-Sheikh as saying after what the daily described as a recent lecture in a Riyadh mosque. “They have been exploited in order to cause destruction to themselves and society.”

The mufti did not refer to suicide bombings in a specific country. Such attacks have occurred across the Middle East and beyond, nowadays most frequently in Iraq and Syria.

Saudi Arabia’s policy toward Syria reflects its regional power struggle with Shi’ite Iran, a strong ally of Assad, whose minority Alawite sect is an offshoot of Shi’ite Islam. Sunni hardliners regard Shi’ites as heretics.