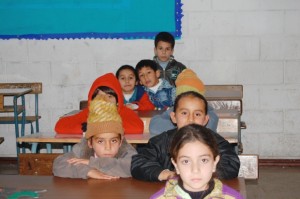 NEAR ZAHLE, Lebanon — Even after the first winter rains began turning the fertile soils of the Bekaa Valley into boot-sucking mud, the trucks came at dawn to take the children into the fields to work.

There was still a late harvest of vegetables to bring in and the farm owners realized Syrian refugee children were the best laborers to do it — cheap, compliant and available by the trailer load. Thousands of them live with their families in 250 temporary refugee settlements that have sprung up across the valley like a bumper crop of human despair.

It was from one of these makeshift settlements that 13-year-old Ghazal started working in the summer. “I didn’t like it,” says Ghazal through an interpreter. “But I had to do it.” She earned a few dollars for five hours work daily — money her family needed to survive.

She doesn’t like talking about it, neither does her father, Hassam. For him it’s a humiliation, having his daughter work after he couldn’t find a job. “It was because of the circumstances, we were really forced to do it,” says Hassam, his head bowed. “I wouldn’t have done it if I didn’t have to. It’s really difficult.”

For him it’s a reminder how far his family has fallen since fleeing the civil war that has raged in Syria for almost three years.

In Syria, he drove a delivery truck for a supermarket and made enough for a modest but comfortable life with his own apartment. Now, the family of seven is crammed into a tent made from wood and plastic donated by aid agencies. Even though Hassam’s tent is holding firm, the rain is pooling outside, turning the camp’s slippery soil into something of a muddy skating rink. Most children stay indoors with nothing to do.

For school-aged children, the tents are gloomy affairs crammed with fussy babies and cranky grandparents. There are no books, no games, little to distract the children except when, if they’re lucky, an old donated television is turned on when the settlement’s generator can spare some power.

The one glimmer of hope for Ghazal is that she might be able to go to school. Ten Lebanese public schools have, with extra money from the Lebanese government and international aid, instituted a second shift of classes. At the Gab Elias primary public school, for example, 710 students (mostly Lebanese) attend classes from 8 a.m. to 2 p.m. while another 650 students (all Syrian refugees) go to school from 2 to 6 p.m.

By Canadian standards, the schools are rough affairs with well-worn furniture and few computers. In the centre of each class sits the Middle East equivalent of a pot-bellied stove providing refuge from a winter that is surprisingly nippy, particularly in the mountains where temperatures routinely hit the freezing point. Many students wear woolen hats and coats in class.

The Lebanese government estimates that since fighting in Syria broke out between rebels and government forces in March 2011, 1.2 million Syrian refugees have arrived in Lebanon, which itself only has an official population of just four million. Of those, there are about 300,000 school-aged refugees, yet only 100,000 are attending school. Many haven’t been in a class for more than two years since fleeing the war and have little prospect of ever being in a class again until the war ends.

The United Nations worries this will become a lost generation.

The UN issued a report at the end of November that painted a depressingly accurate picture of life for Syrian refugee children, conluding that “if the situation does not improve dramatically, Syria risks ending up with a generation disengaged from education and learning.”

Some aid agencies are trying to fill the gap by cutting through red tape and funding institutions that are not officially schools. The Tahaddi education centre in the slums of Beirut is one example where 130 students, a mixture of Lebanese Gypsies and Syrian refugee children, take classes that aren’t recognized by the government but are enough to provide a basic education — and keep them off the street while giving them hope for the future.

While Canada doesn’t provide direct funding for the Tahaddi centre, World Renew, a member of the Canadian Foodgrains Bank, provides monthly food vouchers worth about $60 US to each student’s family to help buy food. By Syrian refugee standards, the children at Tahaddi are lucky, even if they live in a slum district not far from the Iranian embassy which was hit by a double-suicide attack on Nov. 19, giving students on the rooftop playground a front-row seat to the explosions. These are children of war, and both staff and students merely watched the black smoke rise into the air before going back to class.

“We knew immediately it was a bomb,” said Sazan Baban, a social worker at the centre. “To us it is no longer really a shock.”

But the shock of war follows many children long after they have escaped Syria.

Eleven-year-old Ghofran still has nightmares about seeing a mini van filled with body parts drive by her home in the Syrian capital of Damascus. “I could tell they hadn’t been killed in the van,” said Ghofran who displays no emotion as she relates the scene. “There were so many that it was like a small hill.”

The escalating violence convinced Ghofran’s father, a real estate agent, to flee to Lebanon where his family now languishes in one of the makeshift “tented settlements” in the hills surrounding the Bekaa Valley. Ghofran says she would love to go to school and is desperate for even a book to read. Her days are spent playing hide and seek with other children in the camp.

At least she gets to play outside.

Five-year-old Sanaa is a virtual prisoner in the apartment she and her parents share with five other families in the southern Lebanese city of Sidon. Except for a couple of the fathers who have found part-time work and a young boy who goes to school, nobody else dares venture outside for more than a few hours per week. They say their Lebanese neighbors resent Syrian refugees and blame them for stealing jobs and driving up rents.

“I have never felt discrimination before,” said 33-year-old Muhammad, Sanaa’s uncle. “They blame us for what is happening in Syria.”

Muhammad’s seven-year-old son, Abdo, is lucky enough to go to school. Every afternoon when he returns, he digs into his bag for his homework to share with the other children who copy his work on scraps of paper. This is the only schooling any of them will get.

For three days this fall, Sanaa managed to attend kindergarten at a private school. “Those were the happiest days for her since coming to Lebanon,” says her father, Ahmed. But he couldn’t afford the $40 a month tuition and had to take her out. “It broke my heart,” he says.

Ahmed has tried, with no money but some ingenuity, to keep his daughter entertained. Using old electrical wire strung from a hook in the ceiling he has fashioned a swing with Sanaa’s one stuffed animal as a seat cushion. As Ahmed pushes a delighted Sanaa back and forth, the other children line up for a turn. They have no books, no radio, no TV.

“If we had money,” says Muhammad, “we would buy a washing machine.”

But even Sanaa is relatively lucky in the dismal pecking order of Syrian refugees.

Maran Maayh, an office manager with the aid agency Arab Women Today in Amman, Jordan, says some families, desperate for money, have sold their daughters into marriage, a custom that is not unheard of in peace time but one that has been exacerbated in war. “It’s a sad situation because parents are left wondering shall I give my daughter to marriage or should I suffer the rest of the children to death from hunger?”

And there are tales, says Maayh, of families in refugee camps prostituting their daughters out for the night.

They may have escaped the war, but Syria’s refugee children continue to be its victims.
By: GRAHAM THOMSON
Edmonton Journal, Canada
Edmonton Journal columnist Graham Thomson spent the past two weeks touring Jordan and Lebanon to see the crisis first-hand and to witness how Canadians are trying to help. His trip was partially sponsored by the Canadian Foodgrains Bank, which neither approved nor reviewed his work.

Several people in this story are identified by their first names only because they fear reprisals from Syrian authorities.

Top Photo: A few Syrian refugee children were recently able to attend school after the Lebanese government and international aid agencies instituted a second shift of classes at some Lebanese schools. At the Gab Elias primary public school, these Syrian students attend class from 2 to 6 p.m., after the Lebanese children finish up their morning classes.