Karzai: U.S. is "absolutely" acting like a colonial power 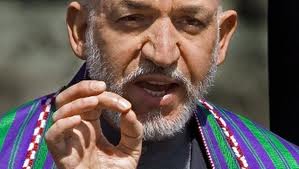 Afghanistan President Hamid Karzai lashed out at the United States, accusing it of making threats in the dispute over an agreement to keep U.S. troops in the country beyond 2014.

In an interview published Tuesday by the French daily Le Monde, Karzai says the U.S. is “absolutely” acting like a colonial power in its attempts to force him to sign the bilateral security agreement by the end of this year. The paper quoted him as saying: “The threats they are making, `We won’t pay salaries, we’ll drive you into a civil war.’ These are threats.”

Washington and NATO officials say the pact is critical to the plan to keep thousands of forces in Afghanistan after 2014 for a training and counterterrorism mission.

Karzai says he backs the long-delayed security agreement but balks at signing it himself. Although a national assembly of 2,500 delegates known as the Loya Jirga endorsed the deal last month and backed a U.S. request that it be signed by the end of the year, Karzai is deferring that to his successor.

Much is at stake if the deal falls apart. Afghanistan could lose up to $15 billion a year in aid, effectively collapsing its fragile economy and making it unable to pay its army and police.

In the interview, Karzai said he could “green light” the agreement before presidential elections due next April under two conditions: an end to airstrikes and foreign raids on Afghan homes; and greater U.S. efforts to help broker peace with the Taliban.

Civilian deaths at the hands of U.S. and allied soldiers have been a key source of contention, exacerbated last month by a U.S. drone strike that killed a child.

Karzai called on the U.S. to use “secret contacts” that he’s convinced it has with the Taliban to help advance the peace process.

The Taliban have refused to talk directly with Karzai, his government or its representatives. U.S.-backed talks between Afghanistan and the Taliban failed in June.