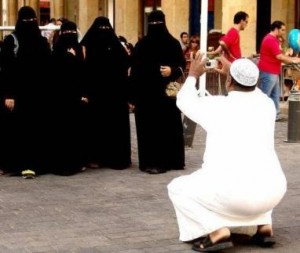 Polygamous Arab men have been attempting to bring all four of their wives to Turkey after buying a house in the country, giving a headache to the Turkish authorities, which can only give a residence permit to one wife.

The Ministry of Environment and Urban Affairs are now reported to be working on a new regulation to resolve this issue, in response to  demands by Muslim Arabs .

“Many Arab men say they want to buy a house in Turkey, but also ask for help from us to bring all of their wives,” said the chairman of Demir Construction, Hamit Demir.

“The existing law in Turkey, which only offers work permits to only one wife for foreigners, discourages many Arabs from buying houses in Turkish cities,” Demir added.

The demand has been rising for real estate in Turkey among Arabs, specifically after the Reciprocity Law went into effect, increasing the minimum stay for foreigners to one year from three months.

Polygamous Arabs are, however, having difficulties in obtaining residence permits for all of their wives in Turkey, where polygamy is not legal.

According to the existing law, foreigners must apply once a year to get the temporary permit for eight years. Then they are able to apply for a permanent residence permit only after eight years of their residency in Turkey. This is also the case for their (one) spouse.

Saudi Arabians in particular want to bring all of their wives to Turkey, sector representatives said, adding that such demands are on the rise. Saudis ranked top of the list of the Arabs who bought houses in Turkey in the first 10 months of the year, with approximately 773 properties sold to Saudis. They were followed by Iraqis, Kuwaitis, UAE citizens and Jordanians.

Overall, around 15,000 foreigners acquired 21,691 houses in Turkey in the first 10 months of the year. The highest demand came from Russia, Germany and Britain, but sales to Arabs will surpass all others when the latest sales are officially declared, according to sector representatives.

“I believe Arabs should not have a problem in coming to Turkey,” said the chairman of Ağaoğlu Group, Ali Ağaoğlu, who has sold over $800 million worth of real estate to foreigners up to now.

Such an easing in procedures could, however, disturb Turkish people, according to Ferhat Bakgör, chairman of Bak Construction, which develops property projects in Istanbul for rich Arabic families.

“Turkish people have not yet become comfortable with living with Arab people in same apartment blocks. They will feel worse if Arab men come to Turkey to live with all their wives,” he said.