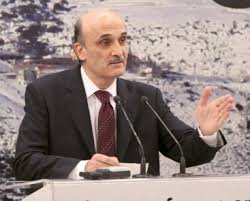 Lebanese Forces leader Samir Geagea lashed out at Hezbollah accusing it of violating the Lebanese constitution and of interpreting it the way it fits its needs.

During a seminar on Human Rights Day, Geagea said:

“Some parties in Lebanon are still insisting on violating this constitution and taking us back to obsolete eras, he said adding :The interpretation of the Constitution changes according to the needs of the Resistance and the constitutional institutions come last because the conflict with the “great satans” and “small satans” must come first.

Geagea concluded his remarks about the Arab Spring by saying:
“The current transitional period will pave the ground for a more humanitarian, just and free Arab world, no matter how long it may take and regardless of the blood that is being shed.

President Michel Suleiman on Sunday reiterated his call on Hezbollah to withdraw from Syria and abide by the Baabda declaration.
The Baabda Declaration was issued following a national dialogue in 2012, and was championed by President Suleiman and signed by all the Lebanese parties including Hezbollah. It called on distancing Lebanon from regional conflicts.

Hundreds of Hezbollah fighters have already been killed in Syria and buried in Lebanon according to activists.