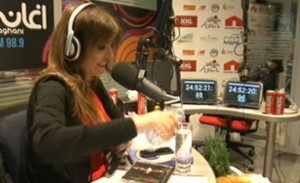 Lebanese Radio broadcaster and TV host Rima Njeim broke Guinness World Records on December 8, 2013 at 12:15 am, by hosting a radio talk show for more than 40 hrs and 7 min.

The goal of the continuous broadcasting was primarily humanitarian and aimed at collecting donations of about $ 20 000 dollars for a girl named Larissa whose family is poor and who needed surgery urgently for heart valve. The operation must be performed before Christmas to save her life.