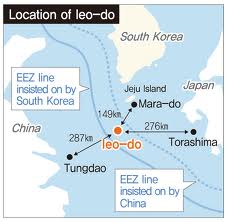 Defying both China and Japan, South Korea announced on Sunday that it was expanding its air patrol zone for the first time in 62 years to include airspace over the East China Sea that is also claimed by Beijing and Tokyo.

South Korea’s expanded “air defense identification zone” was the latest sign of a broadening discord among the Northeast Asian neighbors, who are already locked in territorial and historical disputes.

With South Korea’s newly expanded zone, the air defense zones of all three countries now overlap over a submerged reef called Ieo-do in South Korea and Suyan Rock in China. The reef is controlled by South Korea, which maintains a maritime research station there, but China also claims it. The seabed around the reef is believed to be rich in natural gas and minerals deposits.

The South Korean move came two weeks after China stoked regional tensions by unilaterally expanding its own air patrol zone to partly overlap with South Korea’s and include airspace over the reef. The expanded Chinese air control zone also covers a set of East China Sea islands, called Diaoyu in Chinese and Senkaku in Japanese, which are at the heart of a territorial feud between Japan and China.

With its announcement on Sunday, South Korea expanded its air defense zone more than 300 kilometers, or 186 miles, to the south. It said its new zone would take effect in a week. There was no immediate response from Beijing or Tokyo.

The expanded air defense zone follows the boundaries of South Korea’s existing “flight information region,” an area assigned to South Korea for civilian air traffic control under an agreement with the International Civil Aviation Organization. It will have no impact on civilian flights, said Kim Min-seok, a spokesman for the South Korean Defense Ministry.

But the announcement of the expanded zone raises the risk of an accidental military clash in the region. A military plane entering another country’s air defense identification zone must notify that country in advance. If it fails to do so, the country operating the zone may order it to leave, or dispatch military jets to confront the intruding aircraft.

“Our top priority is to prevent accidental military clashes in the area,” General Chang said at a news briefing.

The State Department offered support for South Korea’s approach, saying that keeping open the lines of communication with China and Japan “avoids confusion for, or threats to, civilian airlines.”

“The United States has been and will remain in close consultation with our allies and partners in the region to ensure their actions contribute to greater stability, predictability, and consistency with international practices,” said Jen Psaki, a State Department spokeswoman.

When China declared its new air defense zone on Nov. 23 and demanded that planes flying in the area first notify Chinese authorities, both Japan and South Korea immediately rejected it. Their military aircraft have since flown through the disputed airspace without informing China.

The United States has also flown two B-52 long-range bombers through the contested airspace, a move seen as a warning by Washington that it would defy what it considered a provocative attempt by China to expand its control over airspace in the region.

South Korea’s air defense zone was first established in March 1951 by the United States Pacific Air Forces command, which wanted to guard against China, which had just joined the Korean War.

Until China expanded its air defense zone, the sky over the submerged reef of Ieo-do was covered only by Japan’s air control zone. South Korea did not attempt to expand its air patrol zone over the reef, partly for fear that such a move might prompt Japan to claim the airspace over a disputed set of islets off the eastern coast of South Korea.

The South Korean-controlled islets, called Dokdo in Korea and Takeshima in Japan, are the source of another long-running territorial disagreement between the nations.

Under Ms. Park, South Korea has emphasized building what it calls a “strategic cooperative partnership” with China, by far its largest trading partner. It also recognizes the growing importance of Beijing’s role in international efforts to curb North Korea’s nuclear weapons program. Ms. Park has met President Xi Jinping of China twice, but the territorial and historical controversies rooted in Japan’s regional aggression in the early 20th century have kept her from meeting Japan’s prime minister, Shinzo Abe.

China’s attempt to police additional airspace over the East China Sea has highlighted a potentially volatile dispute between China and South Korea. The South Korean Navy is already building a $970 million base naval base in Jeju, an island off the southern coast of South Korea, to protect shipping lanes for South Korea’s oil-dependent, export-driven economy as well as to respond quickly to any dispute with China over the submerged reef.