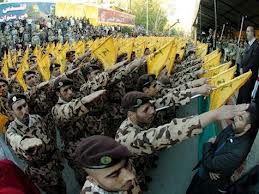 BEIRUT, LEBANON- Under Israel’s wary eye, Hezbollah has ramped up the scope of its military training in east and south Lebanon, another sign that the militant group is girding for a future confrontation with Israel, which it has blamed for the assassination of a senior commander in Lebanon.

The camps, which include firing ranges, assault courses and urban warfare sites, are training thousands of new recruits to the organization. They are clearly visible from the air, a reversal of tactics by an organization that for two decades had trained covertly in order to avoid detection by Israeli spy planes.

The construction of new camps, one of which covers over 7 square miles of rugged mountains, underlines the expansion of Hezbollah’s fighting force since 2006 when it last fought openly with Israel. That they are an open secret in Lebanon, and elsewhere in this volatile region, speaks to the group’s apparent confidence that Israel is not about to launch a frontal attack, such as air strikes, for fear of sparking a new war.

“We don’t underestimate our enemy and we take care when we train. But let them [the Israelis] hit us and see what will happen,” says Hajj Ali, veteran Hezbollah combatant using his nom de guerre, or battlefield alias. He called it a “balance of terror” between the two sides.
While Israel does not seem to be targeting the camps, Hezbollah’s military commanders remain a target. Late Tuesday, Hassan Laqqis, a veteran commander, was shot dead outside his home in southern Beirut, a killing that the group has blamed on Israel. An Israeli Foreign Ministry official denied involvement.

Laqqis was the most senior Hezbollah military figure to be assassinated since the February 2008 car bombing that killed Hezbollah’s then-military chief, Imad Mughniyah.

In Lebanon, Hezbollah, which gets extensive support from Iran, has evolved from a band of resistance fighters three decades ago into a military powerhouse and a political organization with an extensive social welfare network. However, its main focus remains Israel, which it calls an illegitimate occupier of Arab lands.

In the 1990s, the organization confronted Israel’s military on a daily basis in southern Lebanon. On June 2, 1994, Israeli helicopters and jets swooped on an unprotected training camp in the Bekaa Valley in a surprise nighttime attack that killed over 40 recruits. It subsequently switched to using forested hillsides on the opposite side of the valley, abandoning permanent structures for tents and foxholes.

This covert pattern of training continued up until the month-long war in 2006. Since then, Hezbollah and Israel have maintained a wary calm along the border even as both sides prepare for a future clash.

Hezbollah recruits undergo initial training in Lebanon, learning how to use rifles, rocket-propelled grenades and machine guns, as well as map reading, reconnaissance and ambush skills. More advanced training is carried out at military bases in Iran.

Western intelligence agencies first noticed the appearance of visible training facilities in areas under Hezbollah’s control in 2008. The initial camp in the eastern Bekaa included a small urban warfare site, a firing range and a suspected training track for drivers. The fact that the facility was clearly visible to Israeli spy aircraft and satellites raised speculation that it could have been a decoy site.

Since then, other training camps have sprung up across the Bekaa Valley and in south Lebanon. Although the camps are built in remote regions under Hezbollah’s control, they can be observed on Google Earth.

In 2010, a former defense attache at the Dutch embassy in Damascus attempted to access the camp, apparently out of curiosity, but was stopped by uniformed Hezbollah guards, according to diplomatic sources in Beirut. Also present, according to the sources, was an Iranian officer wearing the uniform of Iran’s Revolutionary Guards Corps. The English-speaking Iranian officer sent the diplomat away.

The construction of simple urban warfare facilities may indicate that Hezbollah fighters plan to launch guerrilla-style raids into northern Israel in the event of another war. Sheikh Hassan Nasrallah, Hezbollah’s leader, hinted at this tactic two years ago.

“The major accomplishment of the Resistance is that it complicated the possibility of Israel occupying Lebanon,” he said in a February 2011 speech. “Even more, today, Israel is concerned that Hezbollah might liberate Galilee… I tell the Resistance fighters to be prepared for the day when war is imposed on Lebanon. Then the Resistance leadership might ask you to lead the Resistance to liberate the Galilee.”

Two propaganda videos released this year show Hezbollah fighters storming mock-up buildings decorated in Israel’s blue-and-white national flag. The exercise appears to have been staged at the Janta facility, based on comparisons of the footage and satellite imagery on Google Earth.

The largest urban warfare training facility was built in 2012 on the western flank of the Bekaa Valley. It includes two larger versions of a parallel “street” layout at the Janta facility, with multi-room roofless buildings. It also includes a mock up of a typical “Arab” village of roofless cinder block buildings, most of them single-story.

The timing of the Janta facility’s construction came as Hezbollah’s stepped up its involvement in Syria’s civil war on the side of President Bashar al-Assad, suggesting it was built for this purpose. The facility, which was observed at a distance by a Monitor reporter, lies in Hezbollah-controlled area and its existence is widely known by local residents.

Israel isn’t sitting by idly as Hezbollah rebuilds. Israeli bombers have staged at least five air strikes this year against arms storage sites in Syria. The attacks reportedly targeted advanced weapons systems, such as air defense missiles, long-range rockets, and anti-ship missiles that were believed to be awaiting transfer to Hezbollah.

However, Israel has refrained from striking targets in Lebanon, either because it cannot locate Hezbollah’s arms depots or out of concern that a strike could trigger a hotter conflict. While Hezbollah feels emboldened to build visible camps, its stash of rockets and missiles remain carefully hidden.
“We are masters of disguise otherwise all our weapons depots would be up in flames by now,” Hajj Ali says. “Sometimes we let the Israelis see something, and hide well what we don’t want them to see.”