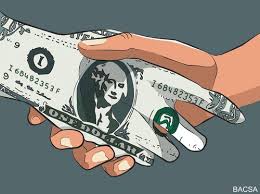 Corruption is bad and getting worse in three Middle Eastern countries that experienced Arab Spring uprisings launched in part to combat graft and other abuses, according to a survey released Tuesday by an international watchdog group.

Transparency International cited on-going political instability in Yemen, Syria and Libya for the rise in corruption.

On a scale where zero is a country perceived to be highly corrupt and 100 perceived to be very clean, Yemen’s rating fell five points to 18, Syria dropped nine points to 17, and Libya was down six points to 15. Iraq, still reeling from the effects of the 2003 U.S.-led invasion, also dropped from 18 to 16.

The group’s annual Corruption Perceptions Index ranks more than four-fifths of countries in the Middle East below 50. Countries in the region scored an average 37, below the global average of 43.

“Imagine what it takes for a country to root out corruption — it always takes institutions with people in them who have levels of integrity and a system of independent oversight,” said Christoph Wilcke, Transparency’s director for Middle East and North Africa.

“In conflict situations, all of that goes out of the window right away.” 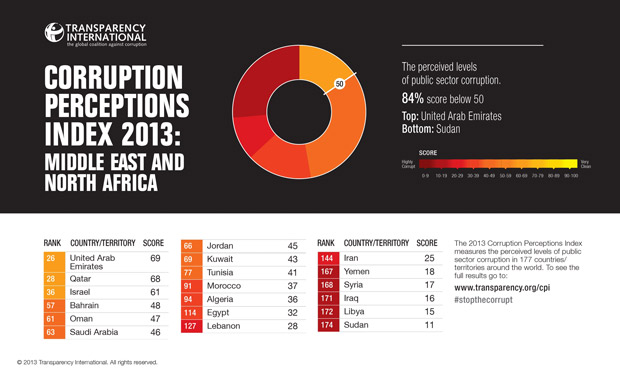 With the ouster of longtime Yemeni President Ali Abdullah Saleh last year, the lawlessness that followed led to an expansion of corruption in army, police and government agencies.

In Libya, bribery and embezzlement were common under slain dictator Moammar Gadhafi’s 42-year rule. But the collapse of his government in an uprising supported by a Western bombing campaign has done little to root out corruption.

Last year, for example, Prime Minister Ali Zidan revealed that a monthly stipend of 3,000 dinars ($2,300) a month for rebels who fought Gadhafi’s regime was paid out to 250,000 duplicated names — meaning Libya may have paid out hundreds of millions of dollars extra until the program was halted.

And in Syria with the ongoing civil war, smuggling, bribe paying and other issues have increased with the breakdown of state order.

Egypt’s score remained unchanged at 32, but Wilcke noted that the report was based primarily on surveys from the first half of the year before the turmoil that ensued after the military removed President Mohammed Morsi in July.

The index measures the perception of corruption in the public sector. Wilcke said that there is a general feeling of corruption across the board in the Middle East, including police, judiciary, and government procurement offices.

“Almost all sectors entrusted with public government functions are seen as corrupt,” he said.

The survey of 177 countries is based on local and international experts’ opinions of public sector corruption.

Denmark and New Zealand tied for first place with scores of 91, followed by Finland, Sweden and Norway. Australia and Canada tied in ninth with scores of 81. Britain was 14th with 76 and the United States tied with Uruguay in 19th place with a score of 73.

Afghanistan, North Korea and Somalia tied for last place with scores of eight.

The survey, first conducted in 1995, draws on a variety of sources that capture perceptions of corruption, including World Bank and World Economic Forum assessments, the African Development Bank’s governance ratings, and Transparency International’s own Bribe Payers Survey.

Greece, one of the countries hit hardest by the European financial crisis, ranked in 80th place with a score of 40 , though that was still an improvement of four points over last year’s result. By contrast Spain, whose economy is also suffering, dropped six points to 59 points and placed 40th on the list.

Transparency’s Western Europe coordinator, Valentina Rigamonti, said that while Spain has seen several scandals and has approved little new anti-corruption legislation, Greece has announced an anti-corruption drive, convicted a former minister on embezzlement charges and has taken other action.

“These are really little steps in the fight against corruption but they are signs the government is trying to do something,” Rigamonti said. “The government showed they can do something but now, and in the long term, we need to see some more changes — especially in implementation.”

Most significant in Europe, however, is that the perception in most countries changed very little, she said.

Update: As you can see from the chart Lebanon didn’t do well . Its public sector ranked 127 among the most corrupt countries.
Lebanon scored 28 this year while the country scored 30 in its Corruption Perceptions Index for 2012, which indicates a rise in corruption.