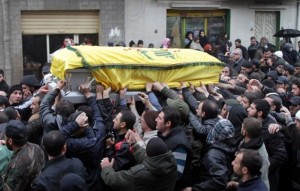 Mourners and Hezbollah officials gathered Wednesday in the Beqaa town of Baalbek for the funeral of Hajj Hassan al-Laqees, a top Hezbollah commander assassinated late Tuesday.

“The people responsible for the martyr’s assassination are not separate from those behind the explosions in Dahiyeh’s Al-Roueiss and the foiled car bomb attack in Dahiyeh’s Maamoura,” Hezbollah official Sheikh Mohammad Yazbek said during the memorial service.

He also said that these assassinations will increase the Shiite party’s determination to continue its fight against Israel.

Laqees was killed on Tuesday evening near the Saint Therese area in Beirut’s Hadath when unknown gunmen opened fire on him when he was inside his car in the parking lot near his house.

Hezbollah accused Israel of being the main suspect in the assassination, a charge that Tel Aviv denied.