Israel's Olmert: ”We have declared war on the US" 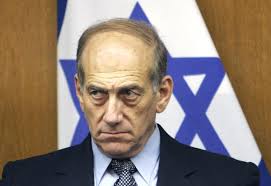 The Obama administration can’t take the heat. Stung by Israeli Prime Minister Benjamin Netanyahu’s reaction to the so-called “deal” made with Iran, President Obama has asked the Israeli leader to “take a breather from his clamorous criticism,” according to the Washington Post’s David Ignatius.

Netanyahu’s anger is justified. Despite the ostensible reality that Israel is America’s staunchest Middle East ally, the Obama administration was engaged in six months of secret, high-level talks with Israel’s foremost enemy. Obama informed Netanyahu of this reality on September 30. And while he seemingly took Obama’s announcement in stride, a day later the Israeli Prime Minister delivered a blistering speech to the UN General Assembly, calling Iranian President Hasan Rouhani a “wolf in sheep’s clothing” looking to exploit this latest diplomatic effort to advance his nation’s nuclear weapons agenda. He also made it clear where his nation stood on the issue. “I want there to be no confusion on this point. Israel will not allow Iran to get nuclear weapons,” he insisted. “If Israel is forced to stand alone, Israel will stand alone.”

In the following weeks, there was no let up by Netanyahu and other Israeli officials, and on November 24 Obama phoned the Prime Minister in an effort assuage his concerns. The two leaders agreed to have an Israeli delegation, headed by National Security Adviser Yossi Cohen, ensconced in Washington, D.C. to iron out a deal that keeps Israel in the loop going forward. Obama also assured Netanyahu the both nations were on the same page with regard Iranian policy goals. It was during that phone call that Obama reportedly asked Netanyahu to tone down his rhetoric.

By last Thursday, it became apparent that while Netanyahu might shift his criticism away from the deal itself, he was not about to keep quiet. “The largest darkness that threatens the world today is a nuclear Iran,” the Times of Israel quoted Netanyahu as saying. “We are bound to do all we can to prevent this darkness. If possible, we will do this diplomatically. If not, we will act as a light unto the nations.” 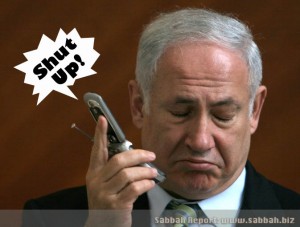 Yesterday, in a response to former Israeli Prime Minister Ehud Olmert’s ridiculous criticism of his approach to the issue, Netanyahu reiterated his intention to keep talking. ”In contrast to others, when I see that the vital security interests of Israeli citizens are at stake, I will not shut up,” he declared. ”It is very easy to keep quiet. It is easy to receive pats on the shoulder from the international community, to bow one’s head, but I am committed to the security of my people. I am committed to the future of my country, and in contrast to periods in the past, we have a loud and clear voice among the nations and we will make it heard in order to warn–in time–against dangers,” he added.

Olmert, speaking at an Institute for National Security Studies (INSS) conference in Tel Aviv, had likened the ongoing criticism as tantamount to an act of war against the United States. ”We have declared war on the US. That cannot be disputed,” said Olmert, who further insisted that Israel needs to avoid anything that might be construed as a “fight” with its closest ally. And while Olmert conceded that a nuclear Iran was a threat to Israeli interests, he stressed that the Jewish State should allow the United States to take the lead in preventing that reality from occurring.

Netanyahu seemingly offered both Olmert and Obama a fig leaf in that regard. ”We always remember that the US has been, remains and always will be Israel’s greatest friend,” he said.

Yet actions speak louder than words. Israeli Defense Forces told British newspaper The Sunday Times that the Israeli leader has ordered Mossad, its international espionage agency, and Aman, its primary military intelligence organization, to search for any evidence that violates the deal signed in Geneva eight days ago. “Everyone has his own view regarding the Geneva agreement,” an Israeli intelligence source was quoted as saying. “But it is clear that if a smoking gun is produced, it will tumble like a house of cards.”

The source further noted that the Israelis will focus their attention on three aspects of clandestine activity, namely bomb designs, ballistic missile development, and secret uranium enrichment sites. “Iran would not have invested such a fortune [estimated at $200 billion] if in the end it does not produce nuclear weapons and turn Iran into a regional superpower,” insisted an unidentified Israeli official.

In the meantime, while the American left is celebrating this “historic” achievement, it is worth remembering two sobering realities. First and foremost, there is no deal. As noted last week, the Iranians contend the White House put out an inaccurate fact sheet regarding what was agreed to, and the State Department was forced to admit that the much-ballyhooed six-month interim agreement has not begun, nor is there any mechanism in place to prevent Iran from continuing to pursue its nuclear ambitions.

Second, Americans either forget or are unaware of the reality that Rouhani is a front man for the real power in Iran, Supreme Leader Ayatollah Ali Khamenei. That would be the same Ali Khamenei who continues to refer to the United States as the “Great Satan,” and who told thousands of Iran’s Basij militiamen late in November that Israel is the “sinister, unclean, rabid dog of the region.” “The real threats to the world are evil powers including the Zionist regime and its supporters,” Khamenei said. “The Zionist regime is doomed to destruction, because this despicable regime was formed by power and imposed on the world, and nothing which is imposed will last,” he added.

The Obama administration’s reaction to Khamenei’s rhetoric? According to the Washington Post, it was “brushed off” by officials shortly before the talks in Geneva began. Peace at any price requires nothing less.