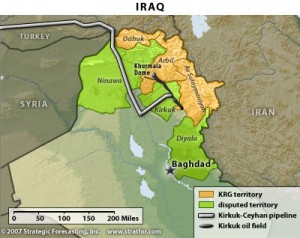 Iraq and northern Kurdistan appear to have found a formula that will allow the autonomous region to export oil to Turkey in a new pipeline, a step towards resolving a long-running dispute over land and oil rights.

“There are no issues,” Luaibi said at a briefing ahead of an OPEC meeting in Vienna. He said technical, trilateral talks would take place in days to finalise details over revenue sharing and metering.

“There are some meetings that will be held to set the measures.”

Luaibi said the central government would retain control over the oil revenue, which would be shared with the Kurds.

“We have held talks with both Baghdad and Arbil to set up a three-way mechanism. We have had very positive talks,” said Yildiz.

“Both the agreements that Turkey has done with the central government and the contracts with northern Iraq are steps that smooth the path of Iraq.”

Turkey’s energy deals with the Kurdish north of Iraq effectively bypass the central government in Baghdad, which claims sole authority to manage Iraqi oil and says independent Kurdish oil exports would be illegal.

Turkey is keen to move the process forward through a three-way mechanism which also includes Baghdad. But the central government might prove hard to persuade, having for years resisted Arbil’s moves towards direct exports.

“Baghdad is trying to find a solution to this, but doesn’t want to lose face either,” said Cuneyt Kazokoglu, Consultant at FGE. “They don’t want it to look like this deal happened despite them.”

A new pipeline from Kurdistan’s Taq Taq oil field is complete and ready to receive flows, the enclave’s natural resources minister Ashti Hawrami said on Monday. It is expected to carry around 300,000 barrels per day (bpd) of oil, which Hawrami says will be ramped up towards 1 million bpd by 2015.