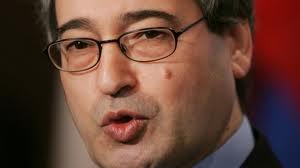 Syria’s deputy foreign minister has requested money and equipment from the international community to help with efforts to remove chemical weapons from his country.

Faisal Mekdad was speaking at a meeting of the Organization for the Prohibition of Chemical Weapons in The Hague.

He told the BBC that Syria needed lorries and armoured vehicles to move the chemicals, because ordinary vehicles would give those he described as terrorists the opportunity to attack.

He described as “nonsense” the idea that such vehicles could be used for purposes other than moving the chemical weapons out of the country.