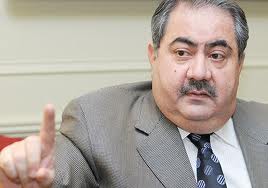 Iraq’s foreign minister said Monday he shared his country’s failed experiences in negotiating a U.S. security deal with Afghan officials, who have repeatedly delayed signing a similar agreement with America.

Hoshyar Zebari did not provide details of his talks with President Hamid Karzai in a brief statement after signing an agreement to facilitate pilgrimages to Iraqi religious sites, but hinted that Iraq needed American help to overcome its security challenges following a wave of brutal sectarian violence.

In 2011, the United States and Iraq couldn’t agree on terms of a similar security arrangement to keep American troops in that country and all U.S. forces pulled out. Sectarian violence has plagued Iraq ever since, and some fear Afghanistan could head down that path without a continued U.S. presence if Afghan forces cannot defend the country themselves.

Zebari’s brief visit came amid fresh tension with the United States following yet another flare-up with the Afghan government. Karzai’s office charged late Sunday that American forces were not delivering fuel to some army and police units as part of an attempt to force the president to sign the security agreement.

The U.S.-led international coalition immediately denied the allegations and said all fuel deliveries to the Afghan National Security Forces were being carried out normally.

Zebari said he shared “our expertise in signing the security agreement with the American forces” and added, “I think it was a very useful exchange of experience”

He added that Iraq still needs “continued U.S. support for the security challenges that we are going through.”

Zebari did not elaborate and reporters were not allowed to ask questions during a signing ceremony for a deal to facilitate Afghan Shiites wishing to travel on pilgrimages to holy sites in Iraq.

Although Karzai has endorsed a long-delayed Bilateral Security Agreement with the United States that will keep thousands of troops here past a 2014 deadline, and a national assembly of Afghan dignitaries has approved it, he has repeatedly refused to sign it. Karzai has instead deferred its signature to his successor after next April’s presidential elections.

The U.S. says it wants the deal signed by the end of next month and has threatened to make plans for a complete pullout after a NATO mandate expires at the end of 2014 if it’s not. America’s NATO allies have also said they will not keep troops here to train and mentor Afghan forces if America leaves.

Although post-2014 numbers have not been announced, it’s thought the U.S. will commit about 8,000 forces with NATO supplying an additional 6,000 if the pact is signed.

Also at stake are more than $8 billion annually in funds for the Afghan forces and development aid if the deal is not signed.

The United States and its allies not only train, equip and pay the salaries of the 350,000-strong Afghan forces, they also supply then with fuel. According to the office of the Special Inspector General for Afghan Reconstruction, the American government paid more than $1.1 billion to fuel the Afghan army from 2007 to 2012. It plans to spend more than that for fuel until 2018, but only if a security deal is signed.

According to SIGAR, the U.S. Congress has appropriated almost $52.8 billion to train, equip, and sustain the Afghan National Security Forces since 2005.

Violence has continued unabated even as Afghan forces have taken the lead for security.