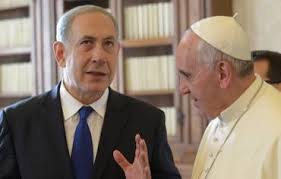 Israeli Prime Minister Benjamin Netanyahu and Pope Francis exchanged gifts during a 25-minute meeting at the Vatican on Monday.

Accompanied by his wife Sara, Netanyahu gave the Pope a copy of a book about the Spanish inquisition written by his father, a prominent historian, bearing the inscription: “To His Holiness Pope Francis, great guardian of our common heritage.”

Sara Netanyahu told the Pope at the end of the meeting, “We are expecting you, we can’t wait.” The meeting comes after the Pope, citing a full schedule, declined to meet with Netanyahu in October, fueling speculation in Israeli media of a pontifical snub.