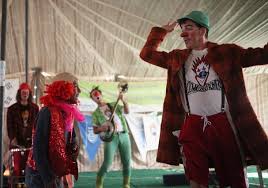 At this sprawling desert camp in Jordan, home to thousands of children who fled Syria’s civil war, a few found a moment to smile Sunday watching a troop of clowns.

Five European comedians working for Mabsutins, a private circus and clown group in Spain affiliated with the U.S.-based group Clowns Without Borders, performed for some 60 children. More than 100,000 people live at the wind-swept camp, only 16 kilometers (10 miles) from the Syrian border, and for the children lucky enough to see the performance, it helped them forget about the challenges they face.

“It was best thing I have seen in my life,” said 10-year-old Rana Ziad, who fled from her restive southern border town of Daraa with her parents and six brothers and sisters a year ago. “It was very much fun and I loved it.”

More than two million Syrians have fled their country’s civil war, now in its third year, seeking shelter in neighboring countries such as Jordan, Lebanon, Turkey and Iraq. At least half of the refugees — 1.1 million — are children. Of those, some 75 percent are under the age of 12, according to the United Nations refugee agency.

A 65-page report issued Friday by the UNHCR highlighted the plight of the children, who are growing up in fractured families, missing out on education as they turn to manual labor, sometimes under dangerous or exploitative conditions. Many become the main breadwinner of their family. At Zaatari, most of the 680 small shops employ children, the report said.

There are schools at Zaatari, as well as recreational facilities, like football fields and playgrounds with swings. Other organizations have come up with activities like having children paint murals on buildings at the camp to keep them active. However, refugees often take apart some buildings to use the material for their own structures and jobs can keep children away from such diversions. Children under the age of 16 make up roughly 40 percent of Zaatari’s population.

The one-hour clown show Sunday was the first of its kind in Zaatari Camp, which is jointly run by UNHCR and the Jordanian government.

Queralt performed as the cartoon character Pinocchio, complete with long nose. He juggled balls and bottles as he danced around to the beat of drums. Some 60 refugee children clapped and cheered, as a handful playfully kicked and grabbed at him.

Another refugee, 12-year-old Mohammad Zaidan, said the show “made us forget our miseries for one hour.”

However, when the show ended, Mohammed walked outside into a swirling, cold wind that swept dust across the camp. He said: “Once it was over, we were back to reality: we are refugees without a home.”