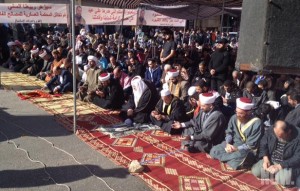 Islamists led by prominent Sheikh Dai al-Islam al-Shahhal blocked the international highway in the Beqaa linking Lebanon with Syria at the Masnaa border crossing in protest against the arrest of a detainee from the Muslims Without Borders organization, National News Agency reported.

It added that the move was prompted by the ongoing detention of Abdel Qader Abdel Fattah.

Abdel Fattah is the deputy chief of Muslims Without Borders.

It was not clear why Fattah was detained.

Update: Voice of Lebanon (93.3) has just reported that the Masnaa road was reopened after it was blocked for Friday prayers.