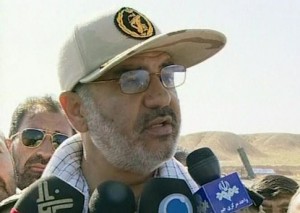 A top Iranian military leader announced late Tuesday that Iran has developed “indigenous” ballistic missile technology, which could eventually allow it to fire a nuclear payload over great distances.

Salami claimed that “Iran is among the only three world countries enjoying an indigenous ballistic missile technology,” according to the state-run Fars News Agency.

“Many countries may have access to cruise missiles technology, but when it comes to ballistic missiles, I am confident that only the U.S. and the [former] Soviet Union could master this technology, and now we can announce that we own this technology as well,” Salami told Fars.

“While we did not have any knowledge about drones, we have developed and acquired drones that travel 2,000 kilometers, conduct their operations, and then land in our desirable regions,” he was quoted as saying.

Iran’s claim to ballistic missiles would be a major development for a country known to use its military machinery as a means of intimidating its regional neighbors.

“Iran’s ballistic missile program has always been to provide the delivery vehicles for nuclear warheads,” Bolton said. “The timing of the IRGC announcement is no coincidence.”

As Iranian President Hassan Rouhani and other officials celebrate the recently announced nuclear accord, Tehran’s military leaders have adopted a harsh line on the West.

Another IRGC leader said on Tuesday that Americans only understand “the language of force.”

“The U.S. has double-standards towards social issues of nations and the language that Americans understands is the language of force,” General Ramezan Sharif, Head of the IRGC’s Public Relations Department, said on Tuesday.

U.S. power is growing weaker every year, he said.

“The pillars of the U.S. strength have become seriously shaky in the world, especially in the Middle-East,” according to Sharif.

Other Iranian military officials claim that Tehran no longer needs to import key weapons as they once did.

“Today, we are honored that we have been able to grow needless in the defense equipment sector with the help of our young scientists and thinkers and now we provide all the needs of the Armed Forces with the best quality,” Iranian Deputy Defense Minister Brigadier General Aboutaleb Shafaqat said on Tuesday.

In addition to installing a new air defense system reportedly capable of destroying high-altitude targets, the Iranians claim to have built a highly advanced unmanned drone that is capable of flying for 30 hours straight.

“Perhaps, [Secretary of State] John Kerry believes that Iran only wants ballistic missiles for peaceful purposes,” said Rubin, author of Dancing with the Devil: The Perils of Engaging Rogue Regimes.

“The fact of the matter is that Kerry and crew left both ballistic missiles and the nuclear warhead trigger experimentation at Parchin [military site] off-the-table” during talks in Geneva, Rubin said. “It’s the diplomatic equivalent of installing a burglar alarm system in your house but leaving the keys in the door.”

State Department Spokesperson Jen Psaki was asked on Tuesday about a Monday Free Beacon report that Iran does not need to freeze its nuclear program until final details pertaining to the recently announced nuclear pact are hashed out.

The six-month nuclear enrichment freeze negotiated under the deal will not actually begin until Iran and Western powers finalize the deal at a later date.

“It has not” yet begun, Psaki told reporters. “The next step here is a continuation of technical discussions at a working level so that we can essentially tee up the implementation of the agreement, so that would involve the P-5 plus one—a commission of the P-5 plus one experts working with the Iranians and the” International Atomic Energy Agency (IAEA).

Psaki said she did not know when the actual deal will be finalized and go into effect.

“Obviously, once that’s—those technical discussions are worked through, I guess the clock would start,” she said.

Psaki added that the U.S must put its faith in Iran upholding the spirit of the deal in the interim.

“In terms of what the Iranians are or aren’t doing, you know, obviously, our hope would be, given we are respecting the spirit of the agreement in pressing for sanctions not to be put in place and beginning the process of figuring out how to deliver on our end of the bargain, that the same would be coming from their end in the spirit of the—of the agreement,” she said.