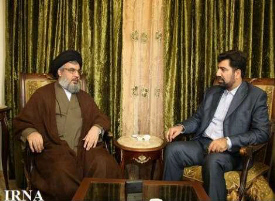 Hezbollah Secretary General Hassan Nasrallah warned that the Iranian embassy will be the target of more attacks that will increase in intensity amid “a difficult period” in Lebanon.

“This is a difficult period that we should overcome. The Iranian embassy will remain the target of more operations,” Al-Akhbar on Monday quoted Nasrallah as saying.

“These operations will continue,” Nasrallah also said in a meeting with Iranian envoy Ghadanfar Roken Abadi and other Iranian officials.

The Hezbollah leader also said that the suicide attacks that targeted the Iranian embassy last week, killing at least 25 people and injuring 147 others, had been “meticulously planned.”

“Those who planned the attack knew the embassy building stone by stone.” He said and added that the aim of the attack was to kill the Iranian envoy and the Iranian chargé d’affaires.

“It is true that the [bombing] operation took place, but they did not achieve their goal, and they will keep trying until they succeed,” the Hezbollah leader warned.

Nasrallah’s remarks came as investigations conducted by the Lebanese security agencies succeeded in uncovering the identity of the perpetrators.

According to DNA tests, one of the bombers was identified as Mouin Abou Dahr.

The tests also revealed that the second suicide bomber was Adnan Mohammad, a Palestinian who lived in Al-Zahrani district.
Both perpetrators are strong supporters of Salafist cleric Sheikh Ahmed al-Assir.

Caretaker Defense Minister Fayez Ghosn told Al-Jadeed television on Sunday it is possible that more than two perpetrators were involved in the bombings.

“There might be a third and a fourth person who participated in the operation… It was the result of careful intelligence work.” He said.

When Speaker Nabih Berri found out the identity of Abou Dahr and that he was from Sidon, he said he was “shocked.” Officials quoted him as saying

“The south has never produced such men in its history,” Berri said.