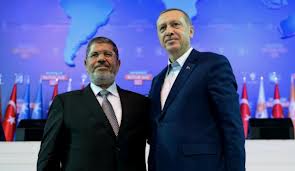 Egypt’s decision on Saturday to downgrade relations with Turkey and expel the country’s ambassador, Hussein Awni Botsala, from Cairo led to an escalation between the two countries. Tensions have mounted since the summer, after a military coupousted the Islamist Egyptian President Mohammed Morsi (left in picture), of the Muslim Brotherhood, which Turkish Prime Minister Recep Tayyip Erdogan (right) and his Justice and Development party have quite vocally protested.

“[Turkey’s] leadership has persisted in its unacceptable and unjustified positions by trying to turn the international community against Egyptian interests and … by making statements that can only be described as an offense to the popular will,” the Foreign Ministry said.

Turkey then expelled Egypt’s ambassador, who had not resided in Ankara since August. The decisions represent a dramatic reversal of the relations between the two countries, which had warmed over the past year. Both countries will remain represented in each other’s capitals by embassies headed by a charge d’affaires, effectively the second in command.

Turkey’s ruling party backed Morsi as an example for the Arab world of a democratically elected Islamist leader. Over the summer, Turkey criticized Morsi’s popularly backed July 3 overthrow by Egypt’s military, while also criticizing the international community for what it deemed as a weak response to the coup.

“The deep-rooted ties and bonds of brotherhood between the people of Turkey and Egypt will remain,” Turkey’s Foreign Ministry announced. “We hope that stability and democracy in Egypt is restored as soon as possible and that relations between the two countries are normalized.”

The Turkish president became the first to visit Egypt after the fall of the autocrat Hosni Mubarak in February 2011. Trade between the two countries increased by about 27 percent in the following year to $3.8 billion (2.8 billion euros) in the first nine months of 2012, with Turkey also increasing its investments in Egypt to currently having 26 development projects there.

Egypt expelled the ambassador after Erdogan renewed criticism of the government, dismissing the trial of Morsi on charges of inciting the slaughter of his opponents while in office and describing a crackdown on the former president’s supporters as a “humanitarian drama.” Erdogan had previously called for the trial of Egypt’s new leaders for an August 14 crackdown in which the country’s security forces stormed into pro-Morsi camps, killing hundreds.