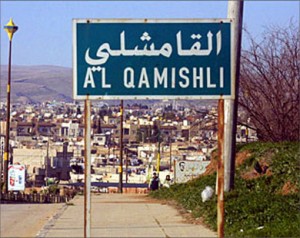 Kurdish militia, dominated by the Democratic Union Party (PYD), sister party of veteran Turkish rebel group the Kurdistan Workers Party (PKK), have held the Afrin region of northwestern Syria and big chunks of the northeast for more than a year.

On Monday, they announced that after talks in Qamishli, on the Turkish border, they had decided to declare provisional self-rule in areas under their control, modelling neighbouring Iraq, where the Kurds have had nominal autonomy from Baghdad since 1970.

Both Afrin and the whole northeast region around Qamishli are mainly populated by Kurds, who form 10 percent of Syria’s population and are significant minorities in Turkey, Iran and Iraq — all major players in the 32-month conflict.

But mounting violence between the Kurds and Al-Qaeda loyalists — who form a major battlefield component of the Sunni Arab-dominated rebellion — has sparked a deepening rift between the Kurds and the mainstream opposition to President Bashar al-Assad.
“The PYD is a group hostile to the Syrian revolution,” the National Coalition, the opposition group recognised by most Arab and Western governments, said in its statement formalising the breach with the main Kurdish militia.

“Its declaration of self-rule amounts to a separatist act shattering any relationship with the Syrian people who are battling to achieve a free, united and independent state, liberated from tyranny and sovereign over all its territory,” the alliance said.

It accused the main Kurdish faction of “attacking units of the Free Syrian Army… and of shirking the struggle against Assad’s regime.

This public breach threatened to add grist to the Damascus government’s longstanding argument that its nominally secular leadership provides vital protection to the Kurdish, Druze and Christian minorities, as well as the Alawite community of Assad himself.

It also threatened to fan the flames of ethnic conflict in northeastern Syria where Al-Qaeda loyalists have assumed the banner of the Sunni Arab majority in its deadly battle against Kurdish militia that has driven tens of thousands of Kurdish civilians to seek refuge in neighbouring Iraq in recent months.