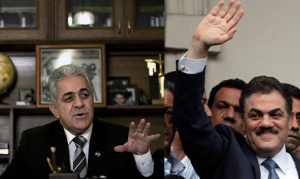 Plagued by infighting, disorganization and disparate ideologies, the non-Islamist parties that backed the July coup against Egyptian President Mohamed Morsi are struggling to capitalize on the downfall of their chief political foe and his Muslim Brotherhood backers.

A coterie of liberal, leftist and other secular and nationalist groups adamantly supported Morsi’s ouster and later cheered on a brutal security crackdown that killed more than 1,000 people and crippled the Islamists’ ability to organize politically.

But even with the competition gone, and with parliamentary elections expected early next year, Egypt’s non-Islamists remain adrift.

Having failed to articulate clear political messages or to construct a solid electoral base, some of these groups are relying on the popular military or the pervasive anti-Islamist sentiment for political survival.

Leftist politician Hamdeen Sabahi and liberal al-Wafd party leader Sayed al-Badawi are the latest of a number of prominent non-Islamist figures to publicly endorse for president the defense minister and coup architect, Gen. Abdel Fatah al-Sissi, should he decide to run next year.

Sabahi and Badawi lead the National Salvation Front, a coalition of dozens of secular political parties that joined forces last year to combat Morsi’s increasingly authoritarian presidency. Badawi said this month that the NSF would back Sissi if the general announces his candidacy.

“They need to decide what they stand for,” said Bassem Sabry, a Cairo-based columnist who has written extensively about Egypt’s political parties. “Endorsing Sissi is an indication of how weak they are and how worried they are about losing influence with the popular mood shifting. They need to improve their rhetoric. This is a big stumbling block for them.”

Countless political parties formed in the wake of Egypt’s pro-democracy uprising 21 / 2 years ago. Some had just a few members, and many had similar ideologies or overlapping — and sometimes vague — goals.

The spectrum of the non-Islamist camp ranges from liberal and secular to socialist, revolutionary or fiercely nationalist. But the patchwork of so many immature parties has fostered a chaotic political landscape, with associations folding, merging or suffering mass resignations on a near-weekly basis.

Rifaat Mohamed Sayed is the chairman of the leftist Tagammu Party. On a recent morning at his office in the crumbling downtown building that houses the party, he, too, was preoccupied with internal conflicts with other NSF members.

He attributed his party’s lack of presence on the ground to the delay in drafting the election section of the constitution.

“How can we prepare for elections? We don’t know what is happening yet,” Sayed said. “All I know is that everybody is preparing for their own interests.”

It is this type of bickering and political indecision that is hampering the non-
Islamists’ success, analysts say, frustrating those Egyptians who are opposed to the Muslim Brotherhood but who see no stable alternative.

“With the liberal parties, there are divisions and there are deals, and all they do is argue over who will run on the [candidate] lists,” said 58-year-old Wagdy Sayed, a carpet seller in the warrens of Islamic Cairo, a lower-class neighborhood dotted with some of the region’s oldest mosques.

He is glad that Morsi was ousted. But the non-Islamists “are not doing what we want, and they cannot rally people on the ground,” the carpet seller said. “They are weak. And we don’t have a clear vision of who wants to run the country.”

Before its collapse this summer, the Muslim Brotherhood commanded the Egyptian countryside with a nationwide web of offices and charities that built schools, clinics and other much-needed infrastructure that the government neglected. It was the kind of social work that made the Islamists highly successful at the polls.

What the non-Islamist parties need to do, Sabry said, is “reach outside urban areas.”

“The longer they take to do this, the more they risk becoming irrelevant,” he said.

But from the spacious, gated villa in Cairo’s Dokki district that serves as the headquarters of the al-Wafd party, the assistant secretary general, Hossam al-Kholy, said there is no “time to go every place in Egypt and talk to the people.” Instead of grass-roots work, Kholy insisted that 80 percent of political campaigning in Egypt is done on television.

“In the village, politics for them is about getting services,” he said. “You go to the village and they ask: ‘Will you build us a hospital? What will you do for me?’ It’s a big problem.”

Kholy, whose party is nearly a century old, said al-Wafd will emphasize its belief in “a modern Egypt” that “does not mix religion with politics,” tapping into the population’s widespread rejection of political Islamists after Morsi and the Muslim Brotherhood’s disastrous time in power.

“If the Muslim Brotherhood runs, we will vote for anybody else,” said 60-year-old Ali Sayed Mohamed, a resident of central Cairo’s Abdeen district. “We want a liberal party — any liberal party.”

But in an illustration of the poor outreach and messaging that characterizes the non-Islamist camp, Mohamed was unable to name a single liberal party that he thinks will run in the next parliamentary elections.

“Anyone who is with Sissi,” he finally said. “Sissi leads them all.”