China’s economic model is running out of steam ! 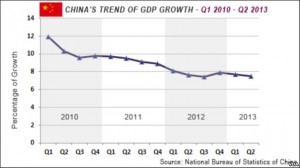 BEIJING — China’s leaders promised Tuesday to let the market play a more important role in the world’s second-largest economy and to improve governance, but they vowed to maintain the Communist Party’s paternalistic control of society and the nation’s dominant state enterprises.

The party leaders made the commitments at a key meeting amid increasing doubts about the sustainability of their economic model.

In a communique released after the Third Plenum of the 18th Central Committee of the Communist Party, they also promised to establish a new “leading team” to design, coordinate and supervise “comprehensively deepening” economic reforms.

“The core issue is to properly deal with the relationship between government and market, and to let the market play a decisive role in allocating resources and to better perform the functions of the government,” the communique said, according to state media. It also pledged to “promote the modernization of the state’s governing system and governance ability,” a sign of President Xi Jinping’s determination to improve the way the party runs the country while not surrendering overall control.

But while it promised to promote the private sector, the Communist Party seemed to shy away from comprehensive reform of China’s massive and powerful state-owned enterprises. The communique stressed that “the basic economic system of the publicly owned economy . . . is an important pillar of Socialism with Chinese Characteristics.”

Many economists say China’s economic model is running out of steam and is far too reliant on government investment in infrastructure and a boom in credit. They are hoping to see measures to empower private entrepreneurs and encourage innovation, boost domestic spending on consumption and rein in free-spending local governments, but many worry that economic reforms will run up against powerful vested interests.

Tuesday’s communique seemed like a step in a new direction economically. But given that party leaders have talked about reforms for a decade and not implemented them, the statement appeared unlikely to convince the skeptics. Much may depend on the makeup of the team empowered to push through the changes and on the determination to overcome internal opposition.

“The Third Plenum has achieved a midway result,” said Chen Gong of the Anbound Consulting think tank in Beijing. “The fact that a leading team has been formed to deepen reforms shows a conclusion could not be reached over many issues at the meeting. It shows the complexity of the situation and the need to do a lot more work.”

Chen welcomed the party’s recognition of the important role of the market but said reforms need to be negotiated with long-powerful groups. “The phrase ‘the government leads’ has been used a lot in the past, but now the government realized they don’t have enough resources to play the leading role in all areas,” he said. “But all of this is just setting a direction. We have to see how far it can go.”

Bill Bishop, publisher of the Sinocism newsletter, agreed that the recognition of the market’s role was a “big shift” and said the new committee to push through changes could be both “powerful and influential.”

While the communique represents a broad framework containing deliberate ambiguity, it could become an important document in pushing through economic reforms, Bishop said. “This is not something that is going to change overnight,” he said. “It is going to take months or years to effectively flow through the system.”

The communique also announced that China would grant more property rights to peasants, who are often forced off collectively owned land with minimal compensation in order to make way for development — a major source of social unrest. Similar promises were made a decade ago, and it remains to be seen whether there is more of an appetite to grapple with land reform this time, especially because land sales and property development are the main sources of funding for local governments.

“We need to let peasants equally participate in the modernization drive and share together the fruit of modernization,” the document said.

The party leaders emphasized improving the environment, which has been a major casualty of China’s dash for growth, and they promised to root out corruption, reduce income inequality and improve “governance,” a word used considerably more than in the past. The word “reform” was also mentioned 59 times, compared to 31 times in a similar document from the last such meeting five years ago.

“This document indicates that Xi is listening to the concerns of the people and trying to speak to them,” said Robert Daly, director of the Wilson Center’s Kissinger Institute on China and the United States. He described it as “a manifesto for effective market paternalism” under the leadership and control of the Communist Party. The question, he said, was whether granting more power to the market to allocate resources was consistent with maintaining the party’s preeminent role elsewhere.

“Is that model sustainable?” he asked. “That’s the contradiction, and we don’t know if Xi can resolve it or not.”

Under China’s five-year political cycle, the first two plenary sessions of the Central Committee deal with top-level leadership appointments, while the Third Plenum traditionally sets the tone for policy, especially economic policy, under that new leadership.

The Third Plenum in 1978 is widely seen as a key moment in opening up China’s socialist economy under Deng Xiaoping. The latest closed-door meeting, which began Saturday and lasted four days, had been awaited as an indication of how the new president would deal with the significant economic challenges he faces, as well as for hints at his political leanings.

Deng Yuwen, a former deputy editor of the party’s Study Times journal, said the communique tended to reinforce the leadership’s relatively liberal approach to the economy and conservatism in politics, even if the proof would come only with the implementation.

“People have high expectations of the Third Plenums because they all associate them with reforms, but at the same time, I also urge people not to see decisions [reached at the plenum] as equivalent to reforms,” he said. “After all, only time will tell.”

Mary E. Gallagher, director of the University of Michigan’s Center for Chinese Studies, broadly agreed. “While it is difficult to know this early how exactly these reforms and ideas will be executed by a divided party, if I were a leftist in China, I would be disappointed in the communique,” she said. “It provides some evidence for the ‘politics left, economics right’ orientation of the Xi administration.”

The communique announced the establishment of a State Security Committee “to improve the state security system” but gave few details. While the emphasis in the document appeared to be on improving internal security, the committee could also play a role in coordinating foreign policy, experts said, along the lines of the U.S. National Security Council, which is translated into Chinese with the same characters.

“They want to have a more centralized system,” said Zheng Yongnian, director of the East Asian Institute at the National University of Singapore. “That’s good for the world.”

There was also a promise to further reform the “socialist judiciary system” to ensure that judicial power is exercised “independently and impartially.” Experts said the judiciary would still operate under the control of the Communist Party but that judges could potentially be given more independence from local governments and that efforts could be made to improve the rule of law in relation to the economy.

Of particular interest to foreign businesses was a promise to “relax investment access, accelerate construction of free trade zones, and expand openness in inland and border areas.”

State television showed a solemn-looking Xi reading out what was presumably the communique in a high-ceilinged hall packed with hundreds of largely gray-suited men, a scattering of military officials and a few women, all listening attentively and taking notes. Behind the president, a huge hammer and sickle — the Communist Party logo — was flanked by 10 red drapes or flags, dwarfing the president and his audience.

But on social media, not everyone was impressed. “Can’t it be more straightforward?” asked one user of the Sina Weibo microblogging service. “Such a lot of long, empty talk.”