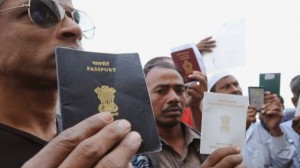 Some 23,000 Ethiopians have handed themselves in since Saudi authorities clamped down on illegal foreign workers 10 days ago, Addis Ababa’s country’s ambassador in Riyadh said in remarks published Wednesday.

The crackdown was marred by clashes between police and Ethiopian migrants on Saturday that led to the deaths of three people in the poor Manfuhah neighborhood of Riyadh.

Ambassador Muhammed Hassan Kabiera told the English-language Arab News daily that the clashes “occurred because the illegal workers were frustrated they did not have a way to surrender to the police.”

The workers took to the streets to voice their concerns, prompting “clashes with some youths in the neighborhood,” he said.

“We have been informed that so far about 23,000 Ethiopians have handed themselves in,” Kabiera said.

On Tuesday, Ethiopia said three of its citizens had died during clashes in the Gulf kingdom, without elaborating.

Thousands of workers have handed themselves in to authorities who are holding them in police-run centers pending the procedures for their deportation being finalized.

In Addis Ababa, Foreign Ministry spokesperson Dina Mufti said on Tuesday that “the act of killing innocent civilians is uncalled for, we condemn that.”

Al-Riyadh daily quoted Prince Khaled as defending the campaign, saying it “does not target a specific group but all illegal” workers and residents.

“We will continue these campaigns until we ensure all residents in our country are staying legally,” he said.

On November 4, the oil-rich kingdom began rounding up thousands of illegals following the expiry of a final amnesty for them to formalize their status.

Among them were foreigners who overstayed their visas, pilgrims who had sought jobs, and migrants working under one sponsor trying to get jobs elsewhere.

Having an official sponsor is a legal requirement in Saudi Arabia and most other Gulf states.

Nearly a million migrants — Bangladeshis, Filipinos, Indians, Nepalis, Pakistanis and Yemenis among them — took advantage of the amnesty to leave.

Another roughly four million were able to find employers to sponsor them.

Expatriates account for a full nine million of the oil-rich kingdom’s population of 27 million.

The lure of work, even in low-paid jobs as domestics or construction workers, has made the country a magnet for migrants from Asia as well as from poorer Arab states.

Despite its huge oil wealth, Saudi Arabia has a jobless rate of more than 12.5 percent among its native population, a figure the government has long sought to cut.