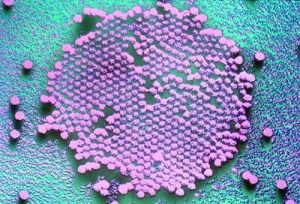 A polio outbreak has been confirmed among young children in northeast Syria and risks spreading in the region, the World Health Organization (WHO) said on Tuesday.

Twenty-two children in Deir al-Zor province became paralyzed this month with acute flaccid paralysis, symptoms that can be caused by other diseases, and WHO’s laboratory in Tunis has now isolated the wild polio virus in samples taken from 10 victims.

“Out of those 22 being investigated, 10 are now confirmed to be polio type one,” WHO spokesman Oliver Rosenbauer told a news briefing in Geneva.

Most victims are under two years old and are believed never to have been vaccinated against the crippling disease or to have received even a single dose of the oral vaccine instead of three which ensure protection, he said.

It is the first outbreak of polio in Syria since 1999, according to the United Nations agency. “Immunizations have started in that area,” Rosenbauer told Reuters.

“The next step will be to look genetically at these isolated viruses and where they came from. That should give some clarity on the origin,” he said.

With about 4,000 refugees fleeing Syria’s civil war daily, polio immunization campaigns are planned in neighboring countries, where there may be gaps in coverage.

“Of course this is a communicable disease. With population movements it can travel to other areas. So the risk is high for (its) spread across the region,” Rosenbauer said.

Photo: The World Health Organization has recently announced 22 separate cases of polio have been identified in the Syrian province of Deir al-Zor