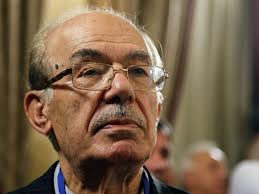 BEIRUT, Lebanon — The U.N.-Arab League envoy for Syria has met a senior opposition figure in Damascus as part of a diplomatic push to convince all sides in the country’s crisis to attend peace talks in Geneva next month.

The envoy, Lakhdar Brahimi, held talks with Hassan Abdul-Azim, the head of a Damascus-based opposition group. The group has called for regime change through peaceful means and is not part of the opposition Syrian National Coalition or rebel groups fighting to topple the Syrian president.

Abdul-Azim says Brahimi told him the U.S. and Russia are determined to hold the peace conference next month.

One of the key sticking points in getting the opposition to agree to the talks is the issue of Assad’s future.

Abdul-Azim says this is for Syrians to decide among themselves.