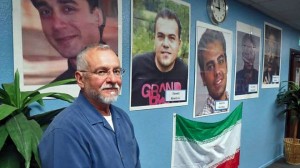 A California pastor with a penchant for protesting behind enemy lines is safe at home after his latest mission, which took him into the belly of the beast that is Iran’s infamous Evin prison.

The Rev. Eddie Romero told FoxNews.com he broke away from his tour group in Iran only to resurface in front of the brutal gulag, where he protested the ongoing imprisonment of five Christian converts, including American citizen and fellow Christian Pastor Saeed Abedini. The 63-year-old minister, who previously waged a daring demonstration in China’s Tiananmen Square, surrendered peacefully to guards at Tehran jail, and was even taken inside for a time.

“The whole plan was to surprise the Iranian government,” Romero told FoxNews.com from his home in Southern California, where he arrived a day ago. “They thought I was just a tourist. They had no idea I was a protester who was going to surrender. Once I left the tour group, I went right to the most notorious prison in Iran.”

Romero, who retired from Hacienda Christian Fellowship in La Puente, Calif., in July, was on a mission to bring attention to the plight of Abedini, Farshid Fathi, Mostafa Bordbar and Alireza Seyyedian — four Christian converts behind bars due to their faith — and Mohammed Ali Dadkhah, a human rights advocate who defended dissidents. He said he was treated with respect during his 24 hours inside the prison, although he was blindfolded when jailers moved him from cell to cell.

“They kept moving me around,” Romero said. “They first brought me in and tried to get their bearings on what the heck was going on here. But they didn’t want me to know the layout of the prison.”

Romero, founder of Exodus8one, whose mission is to directly engage “belligerent” governments on injustices toward Christians and other religious minorities, entered Iran from Turkey with a tour group on Oct. 14 before leaving the tour three days later. He reappeared outside the prison’s gates on Monday, using a cellphone to capture portions of audio and video of the encounter.

Conditions inside Evin prison overall were “substandard” when compared to correctional institutions in the United States and other developed nations, according to Romero, who was arrested in China in 2008 during the Beijing Olympics after demanding the release of five Chinese activists. He was ultimately held for a day before being sent home after 21 days on the run.

“There was no fear because the whole thing was planned,” Romero said. “They actually treated me with great respect … The way I communicated was I kept them confused. Confusion works very good for us.”

Rev. Eddie Romero , also known as “Gadfly,” said he accomplished his goal of raising awareness of the so-called “Iranian Five” but said he won’t be back in Iran anytime soon.“They won’t let me back, that’s over with,” said Romero.

Romero, also known as “Gadfly,” said he accomplished his goal of raising awareness of the so-called “Iranian Five” but said he won’t be back in Iran anytime soon.

“They won’t let me back, that’s over with,” said Romero, adding that he has yet to select his next target country. “I’d like to see the release of the Iranian Five, but in some ways, I’d like to see my own sisters and brothers to rise up and understand the welfare of the church doesn’t rest with diplomats. The welfare of the church rests with its own people and so often, we, as Christians, have depended on diplomats.”

Abedini, Fathi, Bordbar and Seyyedian have been reportedly sentenced to 80 lashes for drinking wine for communion. They were sentenced on Oct. 6 after being arrested in a house church last year and charged with consuming alcohol in violation of the country’s strict laws, Christian Solidarity Worldwide reports. The American-born Abedini was earlier sentenced to eight years in prison on charges of evangelizing in January. As many as 370,000 Christians currently live in Iran, according to an estimate from the most recent U.S. State Department report.

The U.S. State Department had only brief comment on the matter earlier this week.

“We are aware of the reports that a U.S. citizen has been detained in Iran and, due to privacy consideration, have no further comments or details this time,” spokeswoman Marie Harf said in Washington, D.C.

Romero, who retired in July as a pastor from Hacienda Christian Fellowship in La Puente, Calif., founded Exodus8one in 2008 and currently works as a world religion and philosophy professor at Mount San Antonio College in Walnut, Calif. He now wants more aggressive action by religious leaders worldwide to rectify religious persecution in countries like China, Iran and North Korea.

“I want the church to stand up and say, ‘These are our sisters and brothers,'” Romero said. “Insert yourself and force a discussion.”