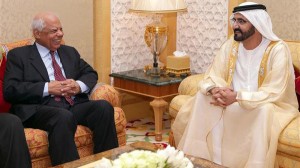 The United Arab Emirates signed an aid agreement with Egypt on Saturday worth $4.9 billion, in another show of support from the wealthy Gulf state to Egypt’s army-backed government.

The aid package includes a $1 billion grant already sent to Egypt in July, while the rest is fresh funds to support various sectors of the economy, the UAE’s state news agency said.

Most Gulf Arab states, rattled by the rise of Islamists in the Middle East, looked on with relief when the Egyptian army stepped in after mass protests and toppled former president Mohamed Mursi in July.

A total of $12 billion has been pledged in aid from Saudi Arabia, UAE and Kuwait since then.

More than $1 billion of the money pledged by the UAE on Saturday will go to supply Egypt with fuel, while the rest will fund development projects including the construction of 15 wheat silos with a capacity to store 15,000 metric tons each.

The agreement, signed during a visit by Egypt’s Prime Minister Hazem el-Beblawi to the UAE, aims to create a general framework for funds already granted and for future aid, the agency said.

Financial support from Gulf states has helped Egypt shrug off a decision by the United States to withhold deliveries of tanks, fighter aircraft, helicopters and missiles as well as $260 million in cash aid pending progress on democracy and human rights.

Egypt is seeking budgetary support from Saudi Arabia, Kuwait and the United Arab Emirates in addition to the $12 billion pledged since Mursi was ousted on July 3.

Egypt has struggled to pay for imports since a 2011 uprising that toppled Hosni Mubarak and helped drive away tourists and foreign investors, two main sources of foreign currency.

Since then the country has run through more than $20 billion in reserves, borrowed billions from abroad and delayed payments to oil companies.