Abductors of Russian in Syria demand swap for a Saudi 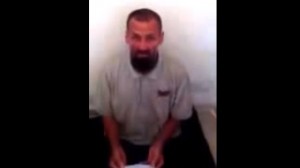 A video message purporting to show a Russian man abducted in Syria set a deadline of five days for the release of a detained Saudi national in exchange for the Russian’s freedom.

The footage posted on YouTube showed a bearded man who identified himself as Sergei Gorbunov and who read a statement saying he would be killed unless he could be swapped for Khaled Suleiman, a Saudi he said had been detained in the city of Hama.

“If I am not exchanged in five days, I will be butchered,” he said in a trembling voice on a grainy video that was also aired on state-run Russian television on Thursday. Russia has been Syrian President Bashar al-Assad’s most powerful ally during a conflict which began with a crackdown on protests in 2011 but which has turned into a civil war in which more than 100,000 people have been killed.

An Arabic caption under the video, whose authenticity could not immediately be verified, said the man was captured by the Mujahideen of Ibn Taymiyyah Brigade.

It said he is asking Russia and Syria to agree a hostage swap between him and Khaled Mohammed Suleiman, who it says was captured in Hama by “the Alawite regime” – a reference to Assad’s government.

“I appeal to presidents of Syria, Russia, the Red Cross … I have not even started a family at home,” the man said. I’m scared and I want to return to Russia, let someone help me.”

The man said he was seized at an airport whose name was inaudible. He said the kidnappers, whom he identified only as “Muslims”, had given him food and treated him well.

The caption accompanying the one-minute video said the Russian was an engineer who had been working in Syria.

There was no immediate comment from the Russian government.

An official at the Russian embassy in Damascus, who asked not to be identified, told Reuters by telephone that diplomats were checking the information and refused further comment.

“We have not been approached by any parties at this point and we are not in a position to comment further,” a spokesman for the International Committee of the Red Cross said by email.

Russian officials say another Russian, adventurer Konstantin Zhuravlyov, is being held by rebels in Syria after crossing the border from Turkey earlier this month.

Kidnappings have become increasingly common in northern Syria, where rebels have captured swathes of territory but are still fighting Assad’s forces who retain many towns and cities.

Several Red Cross workers were kidnapped by gunmen who opened fire on their vehicle earlier this month in north-west Syria.

Photo: Russian engineer Sergey Gorbunov who had been kidnapped in Syria.