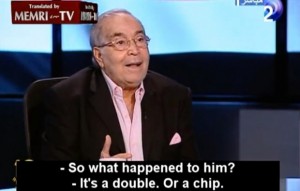 A friend of Muslim Brotherhood spiritual leader Youssef al-Qaradawi is making the wild claim that Israel planted a chip in the radical cleric’s brain and is engaging in mind control.

According to the Middle East Media Research Institute, Egyptian actor Hassan Youssef is a personal friend of the radical Muslim cleric. In a video clip from Egyptian television translated by MEMRI, the actor explained why he believes that the al-Qaradawi seen these days is not actually the really al-Qaradawi, and it’s all because of Israel.

First he argued that there’s perhaps a double playing Qaradawi, before moving on to the brain chip theory and “remote-controlled” mind control.

“The al-Qaradhawi I know is dead. Israel is capable of anything. That’s a double, it’s not him,” Hassan Youssef said, according to a transcript provided by MEMRI.

The Dream 2 TV interviewer responded, “I like it when you use cinema talk … A double is someone who takes a beating instead of the real hero…”

The cleric’s friend seems perturbed by recent statements by al-Qaradawi not specified in the video segment posted by MEMRI.

“I am angry at him – if it is really him. But I am very angry that he is being cursed on all the TV channels. One gets angry when his friend is cursed […] Sheik al-Qaradhawi is very moderate, and is not an extremist. That is why I cannot believe my ears,” Hassan Youssef said.

Here’s the exchange about the brain chip theory, during which the interviewer tried to provide a rational explanation even as he appeared to suppress his own laughter (emphasis added):

Interviewer: He shocked you. When you say that the Sheik al-Qaradhawi you know is dead, and you even suspect that Israel has planted a chip in his brain – which is a metaphoric way of saying that it has taken control over his mind […]

Hassan Youssef: It’s not a metaphor. Let me give you an example. King Faisal’s nephew, who assassinated him … [Then-Saudi] King Faisal was a great monarch, who stood by Egypt in the 1973 war, and was one of the principal reasons for Israel’s defeat. He said [to the West]: “We are used to desert life. We have no problem living in tents, drinking goat milk and eating dates. We don’t want anything from you. Don’t want anything from you. Don’t take our oil. Goodbye.”

He then posited a theory about the 1975 assassination of King Faisal, who was killed by his nephew:

Hassan Youssef: How can someone kill his own uncle? He met a Jewish woman abroad and fell in love with her. She took him to Israel, where they operated on him and planted a chip in his brain, and they remote-controlled him, until he killed his uncle.

Interviewer: I’m afraid many people have got chips in their brains recently […]

Youssef insisted the unspecified al-Qaradawi statement could not have been real.

Interviewer: But it is him who said those things, and you are saying, as a metaphor, that this is not the real Sheik al-Qaradhawi.

Hassan Youssef: I cannot believe that Dr. Al-Qaradhawi would tell lies. … To this day, I respect, honor, and admire the Sheik al-Qaradhawi I used to know, and I kiss his hands and his feet.

Interviewer: But when you see the al-Qaradhawi of recent days – you say he is dead.

Hassan Youssef: I wash my hands of him. I don’t know that man. al-Qaradhawi is dead. The voice was superimposed.

Interviewer: No, that’s his real voice […]

Hassan Youssef: Is it conceivable that al-Qaradhawi would lie?! […]

Interviewer: So what happened to him?

Hassan Youssef: It’s a double. Or a chip. There can be no other explanation. But I advise his sons, who I know very well, to have him declared legally incompetent, if this is due to a disease. […]

The remedy Youssef suggests? That Qaradawi’s sons should have him declared legally incompetent to stop him from publicly speaking.

Here’s the clip, via MEMRI: