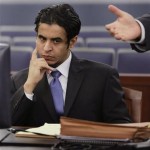 Las Vegas -A 14-year-old California boy testified Monday that he was “freaked out” when a Saudi Arabian air force sergeant made sexual advances toward him in a Las Vegas casino on New Year’s Eve, but he couldn’t figure out how to get away before the man sexually assaulted and raped him on a hotel bathroom floor.

The account came Monday, as Mazen Alotaibi (MAH’-zen ah-loh-TAH’-bee), 24, stands trial in Clark County district court on nine counts, including kidnapping, sexual assault and lewdness with a child. He’s being held on more than $1.7 million bail and could face life in prison if convicted.

“It felt like I was trapped in a corner,” the boy said about the encounter at Circus Circus, his voice getting so quiet as he recounted details of the incident that attorneys repeatedly told him to speak up. “I was freaked out and I wanted to leave, but I didn’t know what to do.”

The Associated Press is not naming the boy, who was 13 at the time of the alleged crime, because he is a minor.

The boy said he was killing time while waiting for a friend to join him on a doughnut run when he met Alotaibi. The air force sergeant had bloodshot eyes and smelled of marijuana, the teen said, and he ended up following the man to a room on promises of getting pot for himself.

Shortly after, the boy said, Alotaibi offered to pay him money for sex, and he verbally agreed to the offer in hopes of tricking the man and running away before anything happened.

It was in the hotel room that Alotaibi shut the boy up into the bathroom, offering him $150 and then even more before forcing himself on the teen, according to the boy’s account.

The boy said he ran off and reported the rape to hotel security, fearing that he may have contracted a sexually transmitted disease.

Alotaibi’s lawyer, Don Chairez, questioned the boy about why he didn’t bite, scratch or hit the sergeant during the encounter. He also pointed out that the teen has given different stories to different people – he told detectives he’d been dragged into the room, but now says he went willingly.

“I made up part of story so I wouldn’t get in trouble with my parents” over the marijuana, he explained Monday.

Chairez has argued that Alotaibi, who was in the U.S. for military training, was tired and intoxicated after traveling to Las Vegas from Los Angeles and staying up all night drinking cognac at a strip club. He also was too limited in English and too unfamiliar with U.S. law to waive his right to have a lawyer with him while he answered police questions, the lawyer said.

Alotaibi, sitting handcuffed in a police interview room, never asked for a translator and appeared at the beginning of the 70-minute videotaped interview to waive his right to have a lawyer present. He also said he didn’t understand why he was there.

Police reported collecting DNA evidence from a used condom and a soiled towel found in the bathroom. The prosecutor said DNA swabbed from the boy’s neck, ear, chest and other body parts was consistent with two people, including Alotaibi.

Chairez has said the DNA evidence was inconclusive and showed no link to Mazen.